No one seems to believe us, but we really liked Cleveland! Yes, I am talking about Cleveland, Ohio.

We spent three days there and here are at least three reasons to support our opinion.

The Friends
We recently had 2 sets of friends (Sara/Caliente, Mike/theFr & Shayna/BFFcoworker & family) move to the Cleveland from Phoenix (odd coincidence), so there is a very good reason alone to come to Cleveland. Our friends make incredible hosts/hostesses. Not to mention one of them is 8 months pregnant and the other has a 4-month old

The Parks and Accessibility
Being a park & rec guy, Deal pays attention to the use of outdoor space in different cities and towns. Well, Cleveland capitalizes on its parks. There are many beautiful walking paths and open spaces. Cleveland is a big city, but the neighborhoods where our peeps live offer a great combination of accessibility and suburbia. 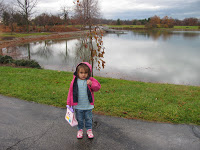 Rock & Roll Hall of Fame
Visiting the Rock & Roll Hall of Fame was a dream come true for Deal. Seriously, he has been salivating over the possibility of visiting for many, many years. He did this visit solo because I could not tolerate spending a whole day there. The hall opened at 10 a.m. on Monday, and he was there at 8 a.m. It closed at 5:30 p.m., and the security guards ushered him out after finding him cuddled up next to Janis Joplin’s car. On the drive back to Chicago, Deal made a bucket list of bands he wants to see in concert. And here I thought Deal had already seen every band out there … damn it.

Seriously, it was a great time. Cleveland has a great history too. Does anyone know about the area called Firelands? Back during the Revolutionary War, British forces set fires to homes all over Connecticut. Then the Legislature gave the people tracts of land to make up for their losses … in Ohio. Sounds fair, right? And, Thomas Edison was born way out in the suburbs of Cleveland. He only lived there for 7 years, but hey, there must be something good in their water because he turned out pretty smart. 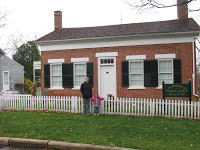 The bottom line is, put Cleveland on your must-see list. Or, just wait for us to move there someday, then come visit us.