Before this week, I had never been to South Dakota (4 states left on my list!!!), while Deal has been on his road trip to move out to Phoenix in 2002. But since South Dakota was a quick 7-hour road trip from CO, we figured WHY NOT?

Well, folks, it was well worth it. I have very good things to say about South Dakota, at least the southwest corner of the state. News alert! It is not just lifeless and treeless prairie lands!

Mt. Rushmore … every American should visit this national monument. It is bold and beautiful. Plus, we saw a mountain goat!!!!

Crazy Horse … not sure what y’all know about Crazy Horse, but back in the 1940s, some starting carving out an Indian head and horse in the mountain, much like they did for Mt. Rushmore. Well, the progress is slow. So slow that the carving hasn’t changed at all since Deal visited in 2002.

Deadwood … a really cool old western town with a haunted hotel, where we gambled. Deal walked away with a profit of $0.75 and I with $3. Yes, we are big spenders these days.

Custer State Park … home of South Dakota’s high point, Harney Peak at 7,242 feet. I think it is one of my top 5 high points (out of the 25 that we’ve done so far) because it was just so impressive. Custer State Park is full of needle-like granite spires and ponderosa pines, which is how the area became known as the Black Hills. Harney Peak rises above all the spires and has a beautiful fire tower at the top built by the Civilian Conservation Corps in 1939 (they did a ton of work in the area, actually). Not to mention Harney Peak is the highest point east of the Rocky Mountains and West of the Pyrenees Mountains. We knew there’s a risk of snow when visiting South Dakota in the middle of January and snow we found. The trail was tricky, but we did okay. I did better than Deal because I borrowed some YakTrax … I think they saved my life. Needless to say, we had the whole peak to ourselves and the temps were in the 50s, so we hung out and enjoyed.

We drove all around the rest of Custer State Park and Iron Mountain Road. There are so many twisty turny roads in the area that are so scenic! We saw tons of wildlife!!! Mountain goats, herds of buffalo, prairie dogs, all kinds of deer … 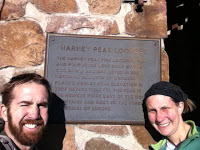 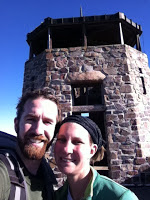 Wind Cave National Park and Jewel Cave National Monument … On Wednesday, the temps in South Dakota turned brutal (below zero with wind chill). And thankfully, that was the day we visited the caves. Cave temperatures always stay between 45 to 55 degrees. We ended up having private and extended tours for both caves since we were the only visitors! This is the greatest part about exploring national parks during the winter! Though the caves were only 18 miles apart, they were vastly different.

Wind Cave is one of the most complex in the world and the second oldest national park. Because the cave is dry, there is an abundance of boxwork, a really cool cave formation that almost looks like honeycombs. 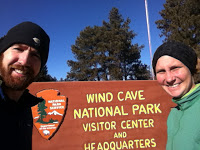 Jewel Cave is the second longest in the world (157.36 miles). Being that it is wet, you see more stalagmites, stalagtites, sparkling calcite crystals (hence the name, Jewel Cave) and gypsum. It reminded me more of Carlsbad Caverns, but without any big open rooms. I am just falling more and more in love with caves.

Firehouse Brewery … Because it is winter in South Dakota, there were very few businesses open. We stayed in Keystone, where there was 1 hotel and 1 restaurant open. So we ventured to Rapid City one night and of course found a local brewpub. It is actually in an old firehouse, so a very cool atmosphere and pretty good food.

Wall Drug … a self-made monument in the middle of nowhere since 1931. Random. Unless you are driving that way, just skip it. Unless you have a thing for tchotchke.

Badlands National Park … Originally we thought we might camp here because Deal camped here in 2002 and still believes the night sky is the best he’s seen. But, the temps were still below zero and a little too uncomfortable for camping. Instead, we spent a day doing all the little nature walks (brrrrr …) and driving the park loop. Again, it is such a different landscape than you would expect in South Dakota and even varied from what we had seen in the other parks. 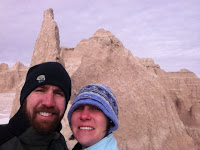 The lesson for today is to visit South Dakota and its gems sometime in your life.

Now we are back at the magical cabin in the mountains of Colorado. SILAdventure/Jamie and DocDoc/Rachel are here with us this weekend (it is DocDoc’s cabin after all!) and we are going to enjoy a relaxing weekend together. You can look forward to another post early next week with some more good news from us …