The other day Deal stepped outside our front door and something caught his eye. 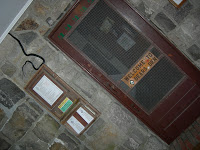 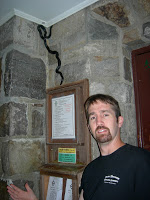 Deal is deathly afraid of snakes. While we were on the trail, our little trio (us and Fire Marshall) took a poll. Which creature of the night often found in the shelter is your least favorite? Mine was the spiders (in particular the wolf spiders or fishing spiders). Fire Marshall hated mice. Deal chose snakes. In fact, he swore off shelters solely because of snakes.

So it’s probably not the best thing that we live in a place with A LOT of snakes (and spiders and mice and every heeby jeeby thing you can think of). Did I mention that sometimes these snakes end up INSIDE? Okay, not the big ones, itty bitty ones. Still. Shudder. My sister found one in their tub when they were visiting. The other day, Deal almost grabbed a copperhead (outside). Double shudder.

If you haven’t already made plans to come visit, I am sure you are checking your calendar now. Just keep in mind; we like to fully introduce you to the outdoors here and all it has to offer.