What have we been up to? – Part Dos

You are here:
I know y’all enjoyed my “What have we been up to?” post from a few weeks
ago, so I decided to write a part two. Okay, the truth is, none of
these things warrant their very own blog post, so I am lumping them
together.

First of all, while Deal and I DO NOT celebrate the Hallmark holiday
called Valentine’s Day, he may have given me the best non-Valentine’s
gift ever. Last night, he took me to see Mumford & Sons!! Let me
back it up and say that these tickets were about as difficult to find as
a four-leafed clover on a ski slope. They sold out in about 3 seconds and every Craigslist seller tripled the sale price. But, he didn’t earn his name “Deal” for
no reason. He of course snagged them for not a penny above the regular sale price just 2 days before the show.

And I know what you are thinking. Hell must have frozen over for me to
want to go to a concert that isn’t Carbon Leaf. Mumford holds a close
second to Carbon Leaf for me. And the show did not disappoint, especially the acoustic versions of 2 songs played in an arena for 8,000 people. Deal came home from Telluride 2010 raving
about them. I was instantly hooked. It is a rare occasion we like the
same music and that he likes something that is popular, and not just
among his hippie friends.

Unfortunately, he couldn’t work his magic for the world tour of the
Banff Mountain Film Festival, so we missed out this year. First time in 4
years!

We are on Insanity Day 37 Max. To say it is killing us would be untrue
because I am writing a blog post, so clearly I am still alive. But, it
is killing us. A slow death, I suppose. If the first 4 weeks were not
insane enough, we have now entered the “max” phase where they step it up
a notch.

We added a new foster cat to the BD family. It is official. We now have
more cats than hikers. The short story behind it is I should never bring
Deal to an adoption event.

We are still going strong on our game get-togethers. Deal is no longer a reigning champ. Our friends keep introducing new games that we’ve never played. Give him time; he will win his title back.

Lastly, I am extremely jealous of our friends in New Hampshire who got dumped on this past weekend. Man do I miss huge snowstorms. Don’t get me wrong, we get snow here, especially being on the mountain. And it is very scenic, but it is not much and doesn’t last. 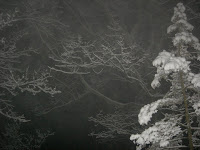