I’m going to switch gears from backpacking to pure road tripping in this post. In our travels during the last few weeks, we’ve stumbled onto a few cinematic hot spots. Admittedly, they are not the coolest of movie locations, but you can still geek out and get excited.

Astoria, Oregon
Location for: The Goonies (1985)

J & I are BIG Goonies fan. It is one of the few movies I quote and it is one of the 5 movies we brought on the road with us to watch (already watched it once). So it was only natural that we would make a slight detour to the Oregon coast and visit the town associated with the film. 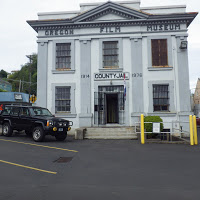 This is the jailhouse where the Fratellis break Jake out of jail. While we were taking this photo, I said, “wow, that really looks like the Fratelli’s jeep!” 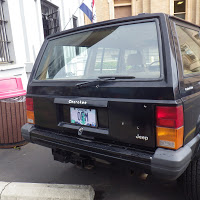 It is the Fratellis’ jeep from the movie, bullet holes and all!! It sort of helps that the jail has now been turned into a mini film museum.

This is the museum where Mr. Walsh worked and the boys raced by on their bikes past him. 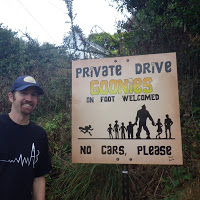 You can even walk up to the Goonies home. I think there is way more shrubbery and landscaping around the home than there was in the movie, but we could still picture Mikey, Chunk, Mouth & Data scheming to save the Goondocks from being torn down. 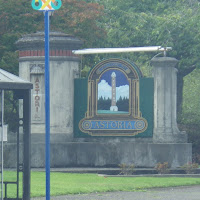 There are a few other locations still there, like Data’s home and the bowling alley, but we didn’t go overboard. 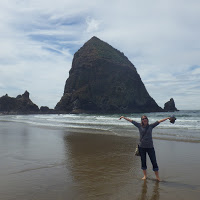 As for Haystack Rock, that is pretty amazing!!! The whole Oregon coast is just gorgeous, but this 240+ foot rock jutting up makes it more beautiful.
GOONIES NEVER DIE!!!!!
Forks, WA
Port Angeles, WA
These are the real towns where Stephanie Meyer based her Twilight series books on. No parts of the movie were actually filmed there, but in other parts of Oregon and Washington (and I am not that big of a fan to track those down). Still kind of neat to think the tiny town of Forks reached stardom for just being there. The drive to Forks & Port Angeles is worth it just because it’s beautiful. 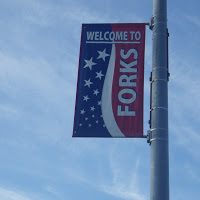 We stopped at Multonomah Falls in Oregon not because it made a quick scene in the movie, but because it is truly gorgeous and powerful at 550+ feet. 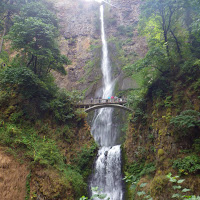