We knocked off 2 more high points as we have been making our way to the Southwest … this makes 7 for this year! With 17 left, you’d think we were in the home stretch. But many of the high points left are daunting with their elevation and difficulty … and we know how I love altitude. J may have to take one for the team on a few like he did on Rainier.

So the first of the most recent two was Humphreys Peak in northern Arizona. The hike is about 10 miles round trip and starts at about 9,000 feet reaching the summit at 12,637 feet. Boy was I glad to cross it off my list. Humphreys has been my lead-filled balloon for a number of years and this was my FOURTH attempt to summit it.

I first attempted to climb it in 2004, long before I knew anything about high points or the effects of altitude. I was simply just going on a hike with some friends (not J). Somewhere at about 12,000 feet, the wicked, unexplainable headache stopped me in my tracks. I told my friend to go on, even though I was so close to the top.

Then, in 2007, J & I decided to “squeeze” in the hike to Humphreys during a trip to AZ for a 4-day backpacking excursion. We decided it was a good idea to do this 10-mile hike after already hiking 10 miles that day up from Havasupai Canyon in sweltering heat. If that wasn’t indication enough that we shouldn’t even attempt the hike, maybe this fact should have been: Justin drove slightly off road into a cactus on the drive from the canyon to Flagstaff because we were a wee bit tired. In any case, we didn’t summit. We made it 1.65 miles up the mountain before deciding sleep and rest were better options.

Then, in 2011, we tried again while in Arizona for a friend’s wedding. This time, we did a lot of planning and it probably would have been successful had the mountain not received an unexpected foot of snow in a late-spring storm. Snowshoes were not on our packing list for that trip, so we only made it about 2 miles in with the equipment we had.

So, here we are in 2013 and I am happy to report we made it to the top!!! The weather was not looking good that day … but we got an early start for that very reason. About an hour after we returned to the car, the skies opened up with hail, thunder & lightening. We felt a little bad for the 100s of people we saw heading up the mountain with cotton tshirts and no rain gear, but they should probably just attend one of our presentations to learn how to properly prepare for a hike.

Our summit of Oklahoma’s high point–Black Mesa–was certainly less eventful and much quieter. Not a single other soul to be seen, other than the stray road runner. Of course it’s in the middle of nowhere on the northwest tip of the Oklahoma panhandle.
It’s 8.4 miles roundtrip at 4,975 feet. They call it “moderately strenuous,” but for us, it was not even close. You spend most of your time walking on a well-trodden path through short-grass prairie land until you hit the “mesa” and climb a measly 600 feet over the next 1.5 miles. I welcome that challenge. At the top, you are looking at 360-degree views of 3 states: New Mexico, Colorado and Oklahoma. 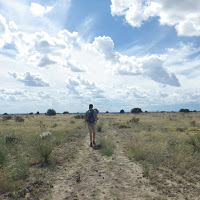 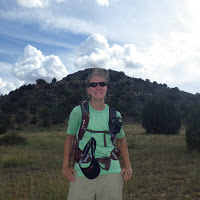 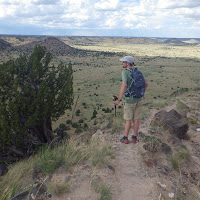 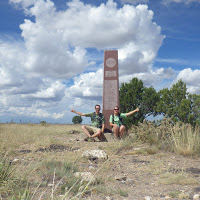 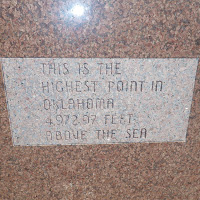 This is probably it for our highpointing this year, as we are wrapping up the tour in a few weeks and won’t be on the road as much. But hooray for the 7 we conquered this year! 17 left!
Categories: Blog Post, PostsBy plavigneSeptember 12, 20131 Comment
Tags: High PointsOutdoor RecreationRoad Trips