Hello from St. Arnaud! We have trekked 159 kilometers, or 102 miles, from Havelock to St. Arnaud, putting us at kilometer 1928! 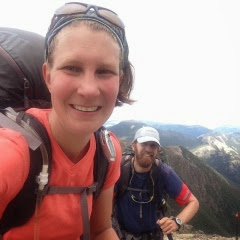 St. Arnaud is not a “town,” per say. The store is TINY and we were happy we sent ourselves a package of resupplies. Plus, we got a bonus package from my mom and some friends in Ohio!! We are staying at the lodge instead of the bunk room because the bunks were all booked. 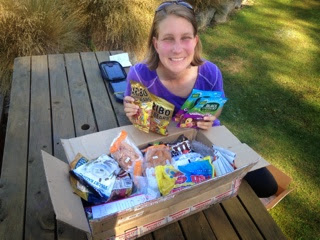 We survived the Richmond Range!! For as long as I’ve been reading about the TA, I have been hearing about the Richmonds. This section has a reputation for being really rough. Even though it is less than 160 kilometers, there are several factors giving it the bad rep. Weather can play a huge role in the number of days it takes people to get through it. We lucked out tremendously with weather. Last week, people encountered snow. The highest elevation we hit was only 1731 meters (5700 feet), but there was a lot of climbing up and down, plus lots of above treeline exposure. This is the longest stretch we’ve done one this trail without any services too. We planned for 9 days, as per the suggestion in our trail notes in case we had to hunker down due to weather. It took us 7 days (and no hunkering down needed).

Here are a few quotes from the trail notes to give you an idea of what we went through:
“The track involves a lot of sidling, at times on steep terrain.”
“The track is often indistinct on the ground.”
“There’s a river crossing on a rock chute just above a 4 meter (12 foot) waterfall. The water is flowing fast down the chute and if you lose footing, you go over the waterfall.”

The good thing is, you are rewarded with AMAZING views. Justin kept saying, “this is exactly how I pictured NZ!” 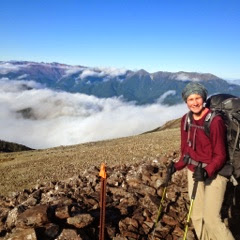 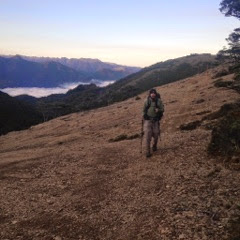 The Maori name for NZ is Aotearoa, translated as “land of the long white cloud.” So fitting! 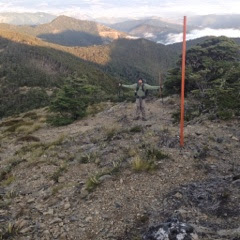 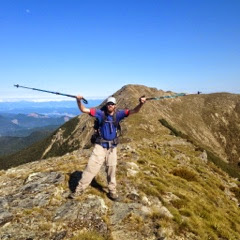 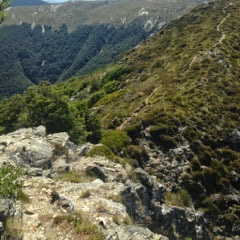 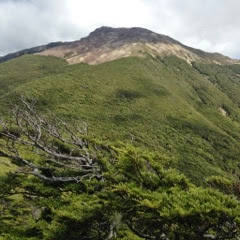 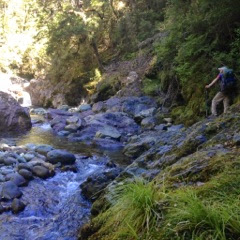 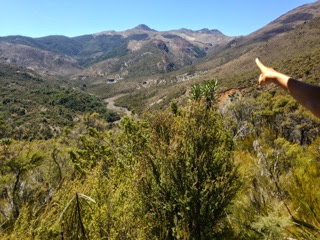 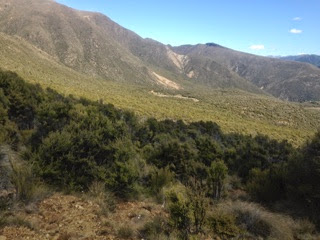 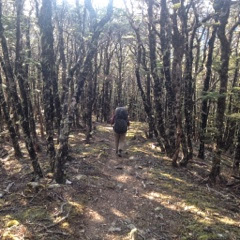 And, here are the rest of the themes from this section!

1) Swingbridges
Swingbridges are becoming a daily occurrence. We crossed a total of 6 in this section. We crossed FIVE in one day. Mind you, the good majority say “max load 1 person.” I question what kind of bridge can really only hold one person. My hope is there is a large load capacity, like from 0 pounds up to 300 pounds or so. There has to be! In any case, I am getting better and better with the swingbridges. I can even stop and wave now without my heart jumping from my chest. 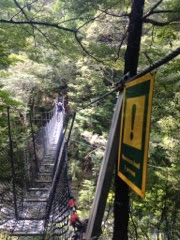 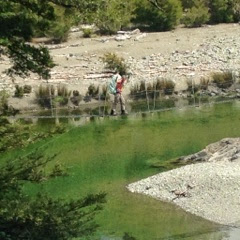 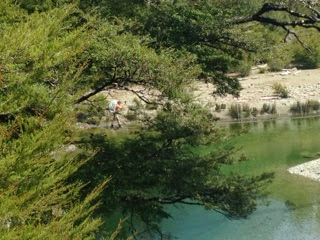 I suppose swingbridges are better than crossing the rivers. The SI has A LOT of river crossings, many that are dangerous.

2) Skreelicious
If there is anything that makes me more nervous than swingbridges, it’s skree. I have a lot of irrational fears and one of them is rockslides. I hate traveling on loose rocks, big and small. Especially when traveling at a 45-degree angle or sidling on a hill. Down is worse for me, and some people can just “ski” right down, but I take my dear, sweet time. In any case, there was a lot of skree in this section, particularly up and over Mt. Rintoul, where it was a never-ending skree field. There was supposed to be rain that day, but got through before it hit. 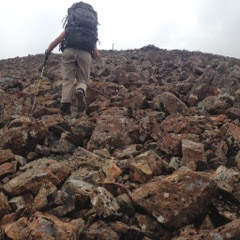 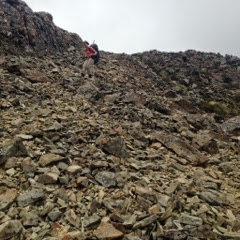 Not my favorite bits of trail. 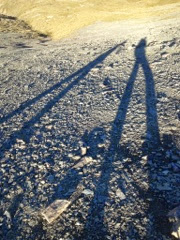 Here we are “sidling” the side of a skree field. Our shadows give the perspective of how far down the drop is.

They should make a rule that the trail should be wider than your feet.

3) Wasps
When we were in the North Island, we walked by a bunch of beehive boxes. It was always a little unnerving to pass these. Well, they’ve released them all on the South Island!!! There are so many wasps on the trail!!! (They seem like bees to me, but the kiwis say they are wasps). They are really attracted to the nectar (which is either insect poo or seeds) on the beech trees. We walk by a lot of beech trees. Hence, the wasps. We didn’t get stung yet, but we will. It is inevitable. Don’t worry, there are not any Asian Giant Hornets. 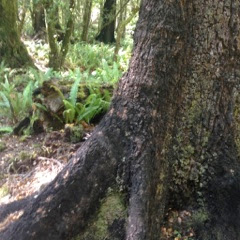 You can see the black bark, but probably not the wasps.

4) Sandflies
People up north kept telling us, “wait until you get to the South Island where the sandflies are really bad.” I didn’t believe them. The sandflies were bad enough already on the North Island. Well, people were right. They are much worse here. There just seems to be many, many more. But we’ve been carrying anti-itch cream since Wanganui and it is glorious. Plus, my mom sent some an anti itch stick in her package. Plus, we have Sawyer picardin spray. Plus, we have headnets. We are determined to fight them off.

5) Huts
We were very excited about the huts on the South Island, however, we’ve been a bit disappointed so far. J is more skeptical as there are usually mice (and apparently rats in NZ huts). The other reason J dislikes huts is because there are usually snoring hutmates.

Well, we stayed at 4 huts and it was hit or miss.

First hut was Rocks Hut. It was awesome. 16 bunks and there were 6 of us. No snorers and no mice. Great views. 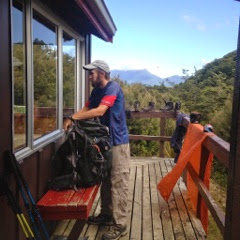 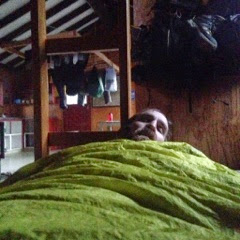 Second hut was Starvell Hut. Great views and no mice. But we shared the hut with 2 other people and one was a major snorer.

Next up was Rintoul Hut. We didn’t even get to sleep inside. It was a 6-person hut and there was 10 of us there! 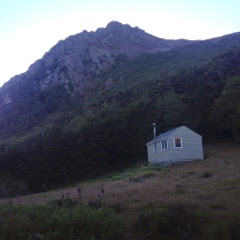 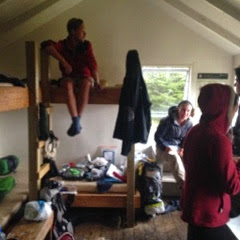 Then there was Top Wairoa Hut. There were 5 of us there, one snorer. On the other hand, there were 15 mice. One really liked running over my head. We got very little sleep that night. Great view from the privy! 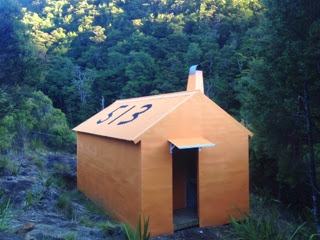 For our last part of the section, we opted to just tent camp on the trail. There were actually some nice nicer (mouse-free) huts, but we couldn’t time it properly. Hopefully, the next section we have better luck with the huts!!

6) People
We can probably count on one hand how many people we’ve seen while hiking on the North Island (not counting all the walkers in the city parks). On the South Island, we’ve already seen four times as many. There are heaps of people just doing the Te Araroa on the SI!

So, it was a great, hard section! We are entering into Nelson Lakes National Park for the next section and it will be just as beautiful, and probably just as hard. We are planning on 6 days out, and hopefully the weather stays on our side!!

I’m leaving you with this cool picture of “vegetable sheep” alpine plantlife found in the mountains. Apparently one cell grows per year, so this one has been around for ages!!

And look at the purple mushroom! 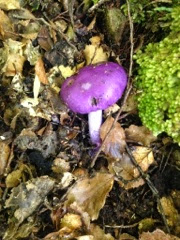