You are here:
Hello from Wanaka! We are at kilometer 2579 and have traveled 141 kilometers (or 90 miles) from Twizel during the past 5 days. We are actually taking a zero day in Wanaka, something we haven’t done since we first arrived to the South Island!! More on our zero day later, but first, the hiking report.

It was really difficult to leave Twizel Saturday morning since we woke up to pouring rain. We milked our 10am checkout time, then headed over to the town bakery to commiserate with some other TA hikers. 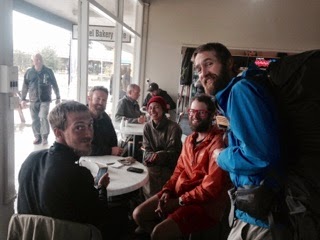 The weather forecast said rain through 2pm. However, the skies started looking okay by 10:30. We decided to take our chances for getting wet and left the other hikers behind around 11am. We hoped to still pound out a big day since it was all road walking. Thankfully, the weather stayed clear and we accomplished our goal!

In any case, we had good weather for the rest of the section (just some very foggy mornings), with a few new themes to boot.

1) An Unexpected Good Section
I wasn’t so excited for this section because lots of other hikers gave it a bad rep. Plus, our notes said this:

This track provides “a good transitional tramp for moderately experienced trampers looking to go the next step, off the heavily used and well-groomed tracks where they learned their craft and onto Te Araroa’s more remote and demanding sections.”

Um, first of all, where are these well-groomed tracks they speak of? I can remember more of the remote and demanding sections than well-groomed tracks. And after 2500 kilometers, I have NO interest in taking it to the next level!

And so, I was expecting tussock grass, major sidling, unmarked trail and navigational nightmares. Well, there was all of that, but really, there was more pleasure than pain in the grand scheme of things. 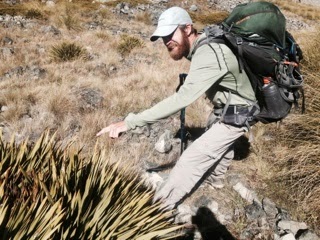 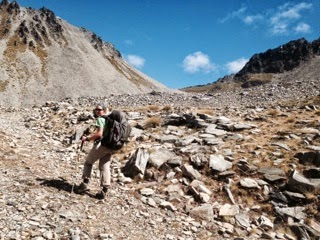 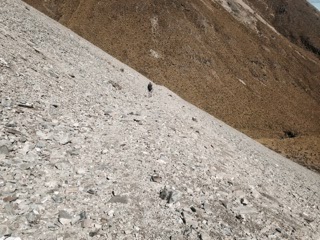 Seriously, this portion of trail was bulldozed. Don’t know how they did it, but I appreciate that they did!

The bulldozed trail was short-lived, and there was some major “sidling” and “undulating” (their words – a fancy way of saying you will have to cling to hillsides as you go up and down steeply). I stopped taking pictures of this madness because it just doesn’t do it justice.

What I will say about this section was that the views were excellent. And we re-entered the forest for a bit, which was nice. 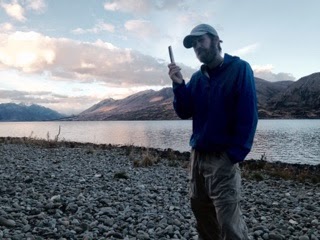 This pix is supposed to be of the view, but it also shows J holding his beard comb. He finally got one and he loves to comb his beard. 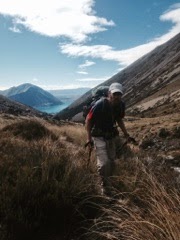 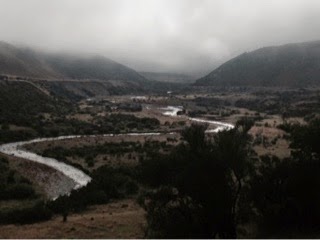 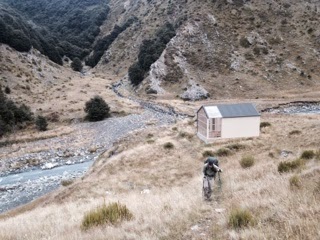 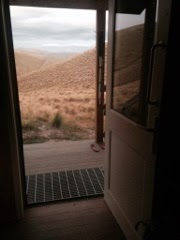 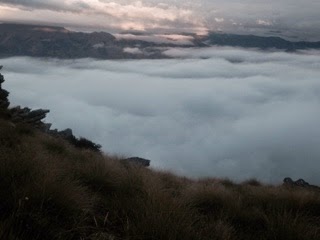 2) Naked Hiking
Okay, this isn’t entirely true. But the 3 of us (we are still hiking with Kevin) did hike a good half a kilometer in our undies.

We had to cross the Ahuriri River. It is not labeled a “hazard zone,” like the Rakaia and Rangitata Rivers. But, I would call it the most dangerous, not talked about, river on the trail. We only had to cross 1 braid, but it is the widest braid we’ve encountered and we heard it was “undie deep.” 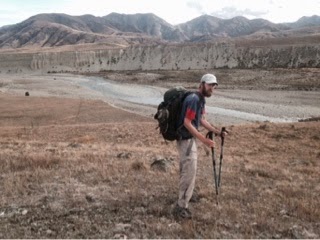 It looks so innocent from afar.

So we planned the Ahuriri River crossing for the end of our day and to camp almost immediately on the other side. Knowing our pants would not dry overnight, we opted to go pantless! We thought how funny it would be if some farmers were watching from the hills, but we felt no shame because at least we would be dry!! 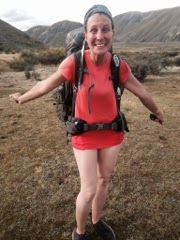 FYI, the crossing did get up to my belly button. We all crossed together, and took all safety precautions. We figured we’d turn back if it got to my chest. It wasn’t too bad, but I don’t understand why it is not ranked in the “hazard zone” category.

We had other river crossings, but only about a dozen or so, which seems like nothing compared with the last few sections. 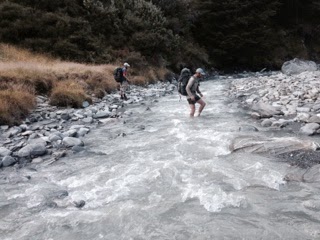 We all pick our poison. J usually tries to find the crossing that will get him the least wet.

3) New Wildlife
I think I’ve mentioned this before, but there are no native land mammals in NZ (except bats). This is not a trail you do if you are after wildlife sightings. Even still, we have spotted a fair share of (introduced and commercially farmed) wildlife during our whole hike, from wild pig to mountain goats. In this section, there were elk!! At first, we thought they were just really big deer, but then we heard them bugling during a rut!!! It was really, really awesome. I have wanted to witness a rut for some time; I never thought my first rut would be in NZ. We even took a short video. 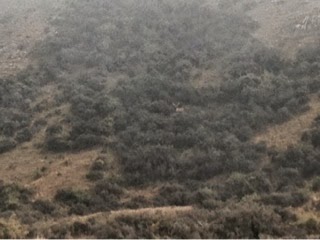 I know you can’t see the elk in the picture, but know that they were there and they were big!!

4) Book of Questions
We haven’t done a ton of road walking on the South Island, and just about 45 kilometers in this past section. But, we found a great way to pass the kilometers on the roads. Kevin downloaded the book of questions! We gone through about 20, such as would you leave the US permanently for $1 million (me – no, J – yes).

5) Return of the Colored Maps
Before we left for this trip, I spent tireless hours printing out the 140 maps for the hike. And I am eternally grateful to my mother-in-law for letting me use her printer. But, in the middle of printing, her color ink ran out. At the time, I brushed it off thinking how it wouldn’t be a big deal to have a few black and white maps. Boy was I wrong. The maps do not provide the greatest detail, but color helps tremendously. Thankfully, there were only about 10 maps in black and white and we are now back in color! 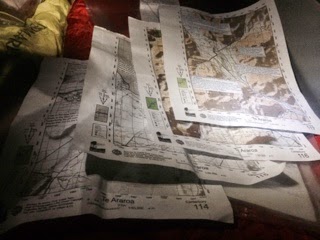