Why I Once Lived in Phoenix: My HCA Story

You are here:
Last weekend, J & I met 3 other couples and their kids in Beckley, West Virginia, for our 15-year reunion as Holy Cross Associates (more on that later). 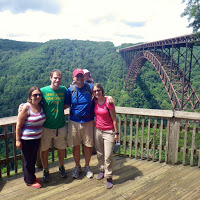 The Holy Cross Associates, minus 2 members 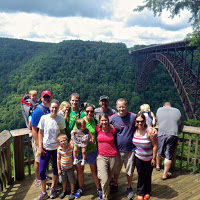 The Holy Cross Associates, plus spouses and kids

I know you are wondering why in the world we would end up in Beckley for any reunion, but it was the most centrally located for everyone (except for us, who come from nowhere). Amazingly, we were able to coordinate everyone’s schedules and pull off something we’ve been talking about for years. We rented a house for the weekend, rotated meal duties, played Cards Against Humanity (after the kids went to sleep of course) and checked out the New River Gorge National River and Bridge (the 4th highest steel arch vehicular bridge in the country!). You would think J & I would have done some whitewater rafting, rock climbing or bridge jumping while in this area, but Cards Against Humanity and trying to finish off a 30-pack of Miller Lite between 8 adults was as wild as it got. 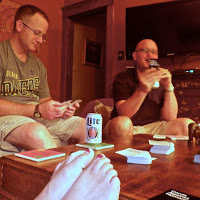 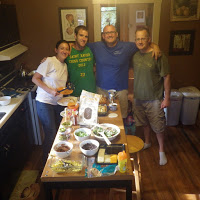 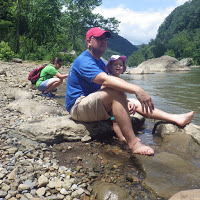 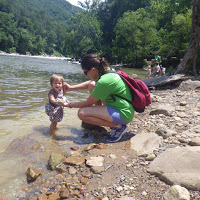 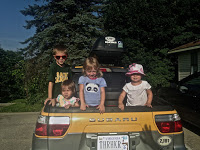 There was supposed to be one other couple there, but she is pregnant and had not been feeling well enough to be far away from her regular doctor (and potentially have to use medical care in Beckley, WV – that should scare anyone). So we settled for FaceTime.

So, about Holy Cross Associates … sit back, grab a cuppa and listen to the story of how I know these jokers.

Chris continues to be best joker in the house.
Back in the year 2000–when airport security was nonexistent and we had to develop our film–I did something crazy that ended up shaping my 20s and taking me in a completely different direction than my 22-year-old self could have imagined.
With a new and shiny college degree in my hand, I decided to forgo a paying job and do a year of volunteer service through the Holy Cross Associate program.
The program was under the umbrella of Americorp (Peace Corp) and was built on 4 pillars–service, community, simplicity and spirituality. College grads were paired together to live in a house while doing service. It is best described as “Real World: Catholic Style.”
I became familiar with the program at my own college (King’s)–being a Holy Cross school and having Associates on campus. One of my roommates was planning to enter in the program and it really peaked my interest. So I signed up and was accepted.
I received my work placement, list of roommates and a 85009 zip code. Admittedly, I didn’t even know where Phoenix, Arizona, was (I have since improved my geographical knowledge after 2 dozen cross-country road trips). In July 2000, I boarded a Greyhound bus with 5 other strangers for the next 48 hours. We were allowed to bring 2 bags and a carry-on bag as our supplies for the whole year, as there was no going home allowed. 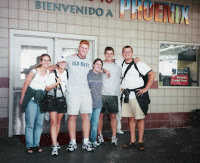 This is all of us after we stepped off the bus. Direct quote: “Let’s move away from the wave of heat from the bus exhaust. Oh, wait, that’s just Phoenix.”
The program provided a roof over our heads and living expenses–albeit small. We all had full-time jobs, but the service aspect of that was that we didn’t get paid for them. My job was with St. Joseph the Worker, which provided job placement services to low-income and homeless individuals (I loved it). Our shared grocery budget was $250/month and we had to work out what made the list and what didn’t. Beer-yes. Tortilla Chips-yes. Feminine hygiene products-no. We lived on a stipend of $60/month for our personal expenses. We shared 3 bedrooms and 2 bathrooms (guys and girls bathrooms). We shared ONE car–a 1980s Buick Century, which had a window that didn’t go down, a door that didn’t open, an odometer that didn’t work and a back window that eventually blew out because of the heat. I was a control freak back then and couldn’t deal with being late to work, so I rode a bike to work every day in hot Phoenix traffic. My butt got very big and I got hit by a car only once (broke 6 ribs).

I’m not going to lie. Living with 5 strangers–2 other gals and 3 boys–was awkward at first. On the Greyhound bus, we swapped seats and went on 5 first dates. “How many siblings do you have?” “What was your major?” Certain personalities were stronger than others. One of the girls was like a bison; she liked her personal space and spent the first 3 months locked in her room (she was the only one who had her own room; I love her to death now and we are very close friends, btw). We inherited each other and fought like brothers and sisters. It was often like West Side Story; we rumbled at midnight. 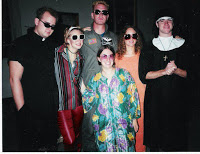 But, we slowly figured it all out. We held weekly “nuts and bolts” meetings to work out, well, nuts and bolts. With our basic needs covered, the year was really about digging deeper and focusing on living life at a level beyond our wildest dreams. It was up to the house how we wanted to live out the 4 pillars of the program. I am proud to say we embraced all the pillars. For simplicity, we implemented practices that helped us live like the homeless we worked with. We had the occasional no electricity night. We slept outside. We agreed not to put on the air conditioning until May 31 (which almost killed a friend of mine who was visiting). We worked at the soup kitchen every Thursday night and after serving 500+ homeless and low-income people dinner, we cleaned the 2 bathrooms they used all night (I made J do this on one of our first dates when we met in 2002 … surprisingly, he didn’t run in the other direction).

Most of all, we had fun. Man, did we have fun. Every Wednesday, we had Community Night and rotated cooking and a group activity. We did things like scavenger hunts, karaoke, bowling, mystery night, and playing some drinking games (there was a lot of drinking games). We had our inside jokes and knew what buttons to press with each other and what not to press. We really gelled with the church community in which we lived and worked. They became our family.