Bandalier National Monument is not the only National Park Service property near us. In October 2015, the NPS purchased the bordering Valles Caldera, establishing it as a national preserve.

This piece of real estate has a crazy history.

Imagine the scene. Mountains. Valleys. HUGE crater. This very distinct bowl among the other land forms is a result of those massive volcanos that happened in the area 1 million years ago. After the volcano erupted, it sort of imploded, leaving a 13-mile wide circular depression. It is pretty wild to imagine a volcano once standing in its place.

From the 1870s through the year 2000, the Valles Caldera land was privately owned. It was only this past year that the National Park Service took management over from a federal trust, thus allowing the public to easily visit and explore. Of course the NPS has zero funding, so access to the 89,000 acres will take some time. You can’t backpack there (yet). The big draw will be mountain biking and backcountry access via vehicles, although the roads are still not open for driving this season.

Given all this, we just day hiked as much as we could, doing about 8 miles around some of the backcountry roads. Besides the wow factor of this huge crater, the park also has a number of structures on the property leftover from the private ownership and from movie sets. There have been about 16 movies and TV shows filmed in Valles Caldera as early as the 1970s. More recently, these titles include “The Missing” (with Tommy Lee Jones and Val Kilmer) and “Buffalo Girls” (Angelica Huston). 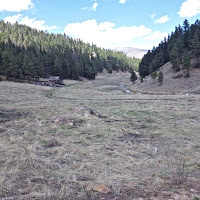 Movie set from “The Missing” 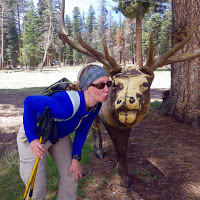 Mystery statues in the backcountry??

It is always fun to see the NPS take over new areas of the country and we are interested to see how this preserve develops over time!