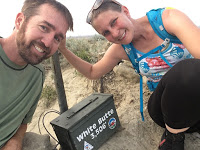 North Dakota marks our 38th high point. We’ve been pretty impressed with ourselves for having such a “high” number. However, this past weekend, we attended the annual “Highpointer Convention” (yes, it is a thing!!) and found that 38 was on the low end!

The convention took place this year in Red Lodge, Montana. Though we’ve been active highpointers for 10 years or so, we’ve never been to a convention. Since we were in Salt Lake City last week for Outdoor Retailer, we rationalized that we were halfway to Montana, so why not hop over there for the gathering?

In any case, there were 286 fellow highpointers at the convention! And, the majority of them had reached all of the lower 48 state high points!! A handful did ALL 50 state high points!!! We even met one person who had done several rounds of the 50 peaks!!!! 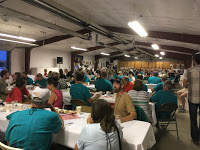 Exclamation points aside, it was awesome to have met so many interesting people and to be able to exchange stories with fellow outdoor enthusiasts. There were several different activities during the weekend, including a watermelon feast and knot tying practice classes (I participated; J sat and critiqued my not-so-great knot-tying skills). We even met the authors of the guidebook we’ve been following since 2006 (Highpoint Adventures by Charlie and Diane Winger), as well as a fellow van-dwelling couple our age. 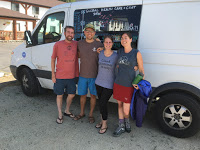 Zak & Hannah live in a van smaller than ours!!

After leaving Red Lodge, Montana, we swung over to North Dakota. Its high point is in the southwest corner of the state, not really on the way to anywhere, but we were in Montana, and North Dakota was relatively close …

White Butte is on private property, so down a few gravel roads and with nothing around but farmland. The 3.4-mile roundtrip hike was easy enough with no drama, aside from the occasional rattlesnakes. Buttes are common in this part of North Dakota, rising from the grasslands with colorful layers of sediment. This was a pretty butte (LOL!), plus we timed it perfectly to catch a famed North Dakota sunset with howling coyotes in the distance. 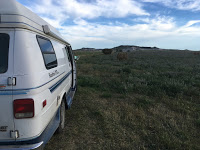 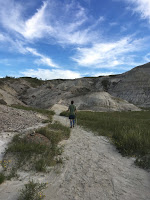 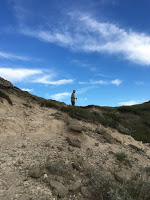 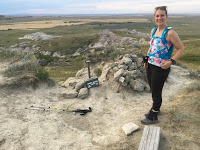 With North Dakota marking our 38th high point, we can almost see the goal of reaching all 50 state high points close to completion. Except that I’m pretty certain I will only make it to 45 high points. Here’s what we have left: