Native Americans have inhabited New Mexico for more than 2,500 years and thankfully, the state has preserved so much of their living culture with a number of national monuments. But, there are also 100s of ancestral sites dotting the land as virtually untouched and unknown treasures.

Thanks to local knowledge, we explored Guadalupe Mesa last week. 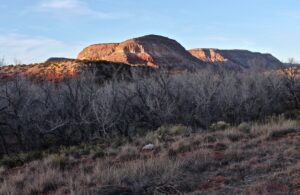 Given this mesa sits in the lower elevation near Jemez Springs, it makes for a better “winter” hike to avoid rattlesnakes and the merciless sun on the exposed trail. We parked at a nondescript trailhead marked by a gate and you immediately have to cross the Jemez River. Even at its lowest (which is right now), it’s still pretty impossible to rock hop at the road. Our local friend led the charge up the mesa, a route that sometimes resembles a trail, but more often resembles aimless meandering through thickets of juniper trees. But if you can eventually find the trail on the southwest face of Guadalupe Mesa marked by small cairns, your path to the top turns what could be a scramble into a steady climb. 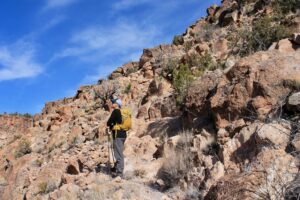 At the top, you are treated to 360-degree views stretching all the way to Albuquerque and the Sandia Mountains. 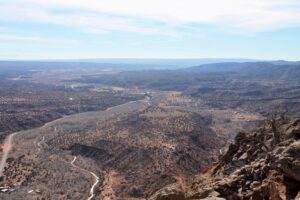 View looking south to the confluence of the Jemez & Guadalupe Rivers 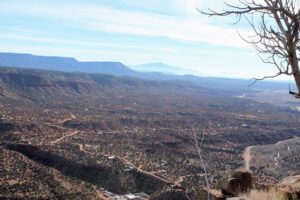 View looking south to Albuquerque and the Sandia Mountains

View looking north to where we live

More than the panoramas, you are immersed into the history of the Jemez. This area served as a a defense settlement for the Jemez Indians when fighting off the persistent aggressiveness of the Spanish in the late 1600s. Despite moving to the superior position at the top of the mesa to shower down rocks & arrows on the invaders, the Spanish defeated the Jemez and captured the pueblo. What remains are the ruins. 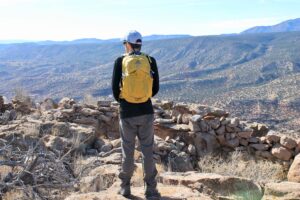 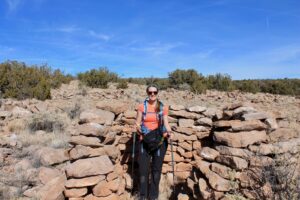 It was almost eerie to stand among the failed protective walls of piled rocks and remnants of the pueblo dwellings. Still, I quite enjoy learning more and more about the history of New Mexico by exploring the land and happy to see other visitors follow Leave No Trace to keep the preservation going.