Well, I might as well post our last Hawaii trip roundup as we are delayed getting back to Alaska from all our holiday family time and I need a distraction from that stress …

Anyway, our last stop in Hawaii was the Big Island with a triple purpose of bagging another state high point, exploring another national park, and enjoying more tropical paradise. 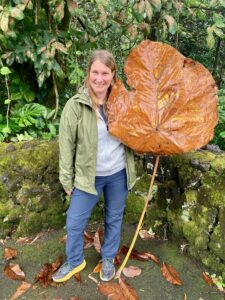 We haven’t ticked off any state high points since 2019. Mauna Kea is one of those high points where it’s best to drive to. Given the fact that most of the Big Island’s elevation ranges between sea level and 4,000 feet, Mauna Kea is a giant at 13,803 feet. And the 12-mile roundtrip hike to the summit gains 4,500 feet through a prehistoric landscape that looks like it’s on life support. Basically, a long, unappealing slog.

So we knew we’d drive. The problem is, the last 5 miles of the road to the summit is pretty treacherous. It’s mostly unpaved and rocky, with a grade that makes lots of inexperienced drivers blow their brakes out. So 4WD with low range on your rental car is a must, and some companies prohibit the drive to the summit. 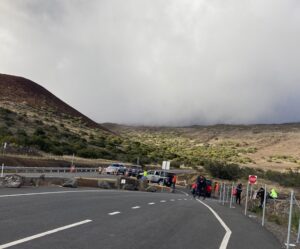 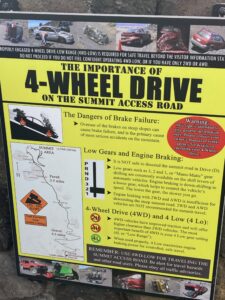 Given this, we decided to go with one of the guided tours up to the summit, and actually we would highly recommend Mauna Kea Summit Adventures’ Sunset & Stargazing Tour. Having a guide is always a bonus as you learn so much about the area. There are 10+ HUGE telescopes scattered around the summit operated off-site by astronomers from around the world, so it was interesting to learn a bit about that alone. Once at the summit, we were standing atop major spiritual significance to Native Hawaiians and enjoying an entirely unobstructed view of the horizon for the sunset. What an experience for our 46th high point! 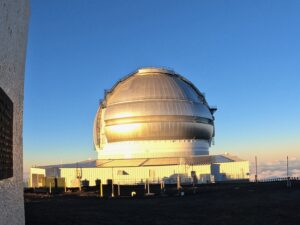 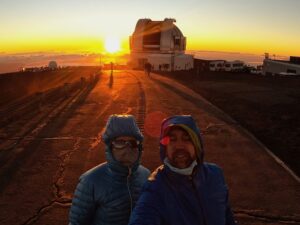 After enjoying a beautiful sunset above the clouds, we made our way down the mountain for the stargazing portion of the tour. Not only was the dark star-studded night sky the best we’ve seen, the computerized telescope provided by the company helped us see Saturn’s rings and Jupiter’s moons! 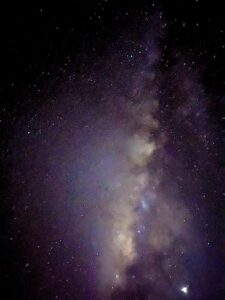 On a side note, the summit road can close at anytime because of weather. There were blizzard warnings for the Big Island shortly after our trip, which closed the road to Mauna Kea the day after we were on the summit. The temps might have been 32 degrees at the summit for us, but it was clear skies all around.

As for Volcanoes National Park, which marks our 57th national park, we also had pretty perfect timing since there was a volcano erupting and we got to see 2,000-degree molten lava seeping from the Earth!!! It was starting to seem like our trip to the Big Island was paved in 4-leaf clover! 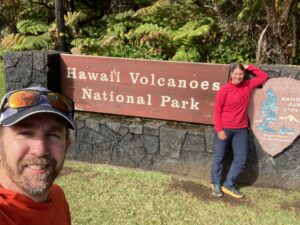 On September 29, 2021, a fissure eruption was detected in the Kilauea summit caldera, which was four months after the end of a previous Kilauea eruption. We were very lucky that even 2 months later, there was still lava activity for us to witness. Someone advised us to see the eruption at its finest, go at night. As we were walking to the Keanakako’i overlook at 9pm, the reddish orange glow in the sky literally stopped us in our tracks. It felt like an apocalypse. As we got closer to the volcano, we watched the Earth churning with fiery, blistering whirlpools. If that’s not a wow factor and a way to feel powerless on this planet, I don’t know what is. In another amazing stroke of luck, the lava decreased sharply just 2 days after we left the island. 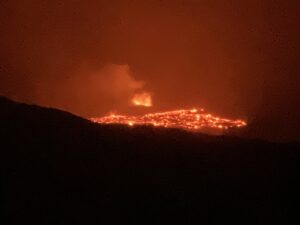 And for the record, we went back to see the volcano erupting during daylight hours, and while it was cool to witness a fissure in the Earth’s surface that looked like a spaghetti pot steaming and boiling over with volcanic gas, it’s hard to beat the red we saw at night. 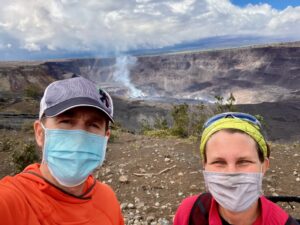 You could probably visit this park once a year, and every time it would be a different experience thanks to unpredictable Mother Nature continually flexing her muscles and shape-shifting the land.  The park is built up by eruptions and worn down by erosions, revealing a tectonically wrinkled landscape. 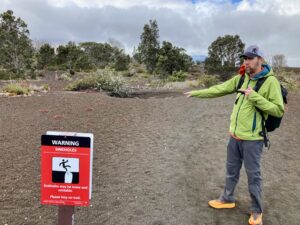 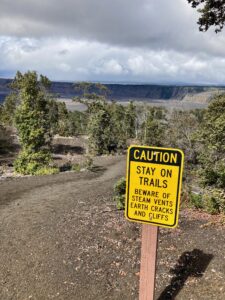 The current volcano erupting, Kilauea, is one of the most active volcanoes in the world, and has experienced 50+ eruptions alone. During one of Kilauea’s wakeups from 1983 until 2018—its longest continuous eruption—lava poured into the Pacific Ocean. It shaped a new craggy shoreline with geological wonders dotting the landscape, like a mile-long Kilauea Iki crater formed by a lava lake and now lined by steam vents. 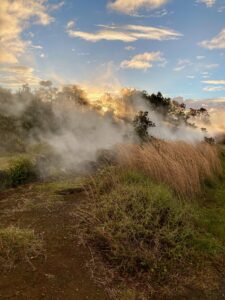 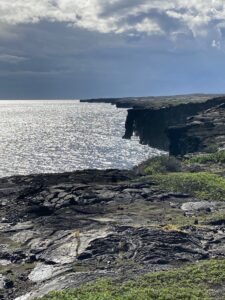 Pu’u ‘o’o is another active shield volcano in the park, and had been erupting for 35 years until 2018. The park’s acreage was increased by hundreds of acres during that eruption, and because Chain of Craters Road was in its firing lane, 9 miles of it was engulfed permanently. 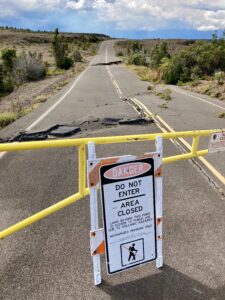 Though our shoe outsoles took a beating doing battle with the igneous rock surfaces, it was neat hiking atop a stark landscape morphed and buried by magna flow. Among the cinder cone hills, you could see where life returned in bits (like ohelo ferns). But at any given moment, fissures could open and send lava fountaining into the air again. 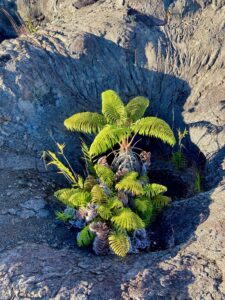 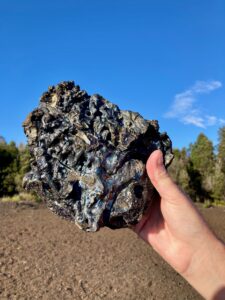 Outside of the park, we did a private tour of Kazumura Cave, which is the world’s longest known continuous lava tube at 42.5 miles.

A lava tube forms because the advancing magma cools from the outside in as it is draining out to sea. Lava erupts at 2,165 degrees, so the air and ground temps in Hawaii are “cold” to lava, thus a hard crust forms atop first, and everything under that crust continues to move and cool slowly. 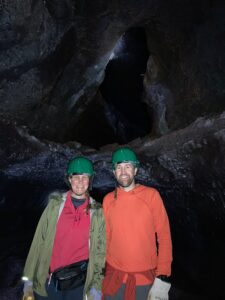 These lava tubes happened as part of the Aila’au eruption during the 1400s. And there are other lava tubes and tours around the Big Island, but this one is quite unique. A single guy began running this tour on his property after he found an entrance when he bought the land. There are 101 known entrances to this cave, but most are smaller and this is the only tour for Kazumura Cave. Securing a spot on the tour is like a secret club. You call a number to schedule a time (no online reservations) and you get an e-mail with the directions to the house (with explicit instructions not to share them). Without signing any waivers, you make your way into the Earth’s belly following a stranger who locks the door to the cave behind him. Perfectly normal, right? 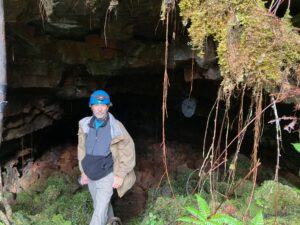 Justin & I opted for the 2-mile tour. You walk upright the whole time, as the highest point is about 45 feet, but sometimes we had to climb down ladders to move through. Lava tubes have all sorts of fun formations, like lavacicles (similar to stalactites), lava straws, lava strings, floaters, sinkers, lava foam and more. We are sort of cave nerds, having been to tons around the country. But this was our first lava cave! Anyway, highly recommend the tour if you’re on the Big Island and into that. 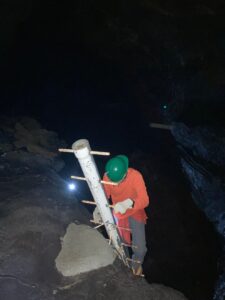 Phew! That was a lot of science and information. I can understand if you just skimmed it and looked only at the pretty pictures. And overall, our trip wasn’t all high points and volcanoes.

We stayed in Volcanoes, just outside the national park, on the East side of the island, actually in a tree house with a bird theme. Besides the unique decor on steroids (there was a diorama with moving birds!!!!), it was neat to stay above the trees and ferns, which are bedecked with unkempt mossy beards. It is quite possibly my favorite Airbnb ever!! 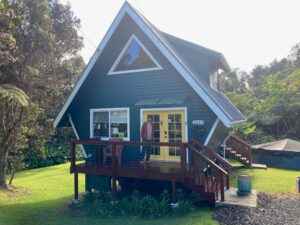 On our way to fly out of Kona, we took the scenic drive along the northern coast, on the hunt for waterfalls, sea cliffs and black sand beaches. We found it all in spades. Some highlights included: 442-foot Akaka Falls, which form a stream-eroded gorge, Waipo Valley’s secluded lush tapestry of tropical land and Pololu Valley’s dramatic Kohala coastline of verdant cliffs and jagged rocks. 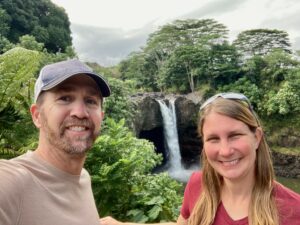 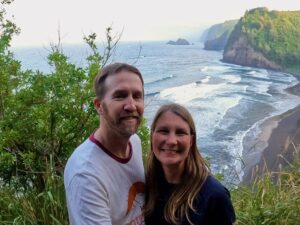 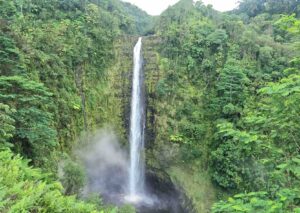 So the last island was just as awesome as the first three! I can’t wait to go back to Hawaii again at some point. But right now, it would be a Christmas miracle if we get home by the end of 2021.