Currently living/working: I’m still in that scheming/pitching/planning groove for future freelance writing projects and working on getting my book on shelves in bookstores. The hustle will forever be the least favorite part of my job, but I’m doing it. We did have a few actual projects with deadlines this month, such as my 2022 Best Foods for Backpacker, and Justin is in the midst of a new gear writing project for GearJunkie. It’s not a constant churn of paid writing, but it’s something. Plus, I know the summer storm of work will be upon us soon, so I’m happy for the down time.

Current mood: This month was full of ups and downs (sometimes at the same time), twists and turns, and magical landings. I let myself hold space in my heart to be sad and throw a woe-is-me pity party. Because first of all, this month marks 3 years without my dad, and that’s rightfully emotional. Second of all, after 2 years of warding off the virus, it finally came to our household. My prediction was that we were going to pick it up during all our travels, but instead we picked it up from someone in our small bubble of friends! I guess it was inevitable eventually.

Currently thankful for: Covid for me was a bad cold with a cycle of congestion followed by draining (yuck) for a week. I had one full day of awful headaches, body aches and chills. Justin had similar symptoms, but no body aches/chills. I’m just glad it didn’t hit either of us harder!!!

Currently proud of: I’ve been working super freaking hard on pitches and book marketing, yet I still have a lot of negative feelings crashing through me—imposter syndrome, incompetence in pitching and questions about where my career as a freelance writer is going. But I’ve set my waypoints and am sticking to it. Most pitches are still simmering, and I’m not sure my efforts will have a huge return on investment, but I feel hopeful and need to publicly give myself a gold star for trying. This is part of learning to strike a balance between grit and persistence with self-kindness and grace.

Currently regretting: Justin missed the whole entire Superbowl! Well actually, he caught the last 90 seconds. There are a few winter guiding trips through Traverse Alaska, and one of his happened to be Superbowl weekend!!!! First time he’s ever missed watching the Superbowl live … we even planned a zero day on our Te Araroa trek to watch it in New Zealand!

Currently amazed by: Winter has been bonkers in these parts—definitely in the Bill Murray Groundhog Day category. “It’s gonna be cold, it’s gonna be gray, and it’s gonna last you for the rest of your life.” I’ll add to Bill’s quote: “it’s going to be snowy.” Winter’s curtain fell Sept. 17 and stayed down. The mercury dropped, then crawled under a rock. Storm after storm has piled up massive snow loads. It’s Alaska, yes, but it’s cra-cra nonetheless.

Our paths are getting narrower and narrower.

Currently not excited for: With all our snow, it’s hard to imagine smelling and seeing dirt for a few more months. But there were a few days in Feb when temps rose to 40 degrees for some thawing, and it gave us a glimpse of the mess that will come in spring (better known as breakup in Alaska). We are literally surrounded by feet of concrete drifts, so chipping away and digging out will be a bit of a task. Not to mention the endless mud that will follow. 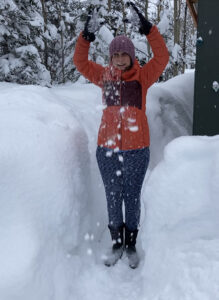 Patrice for scale on the snow pack.

Current guilty pleasure: I added a few mental health-boosting tactics this winter, including a bird feeder out our window! I grew up with a mom who always fed the birds bread (that’s a no-no), but love this Leave No Trace article that shows bird seed is an important boost for birds, especially in Denali during our harshest months. Justin & I are both entertained watching the chickadees and red breasted nuthatches—plus occasional gray jay and magpie. I personally won’t put out our feeder for spring/summer/fall because of the bears, squirrels & voles, as we once had a bear get into our bird feeder in New Mexico! 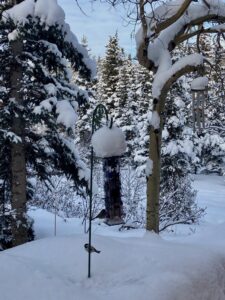 Currently worried about: Spruce bark beetle. Hear me out. One of my newest “clients” has been a local watchdog group, Denali Citizens Council. They wanted to generate regular content for their members, keeping the community informed on local issues. It’s not my highest paying gig, but I really, really like investigating and staying on top of issues, plus it puts me in more of an activist role through my writing than sitting on the sidelines. In any case, my latest article was about the spruce bark beetle, which is a normal healthy component of Alaskan forests, but we’ve been in an outbreak since 2016, and the acres of dead trees as casualties of the relentless beetle march is edging north into our community. The amount of snow and cold temps help, but probably not enough to curtail the beetle damage. We are SURROUNDED by spruce trees, so it’s worrisome to think how changed even our backyard could look in a few years.

Currently excited for: Covid might have screwed this up, but we have an in-state trip in a week that is very exciting …  I’m not going to mention so I don’t jinx it!

Current confession: I know there’s a ton of drama surrounding the Olympics, but we really enjoyed watching!

I did a book swap with new author Andrea Lani for her newly released book, Uphill Both Ways: Hiking toward Happiness on the Colorado Trail. In terms of trail memoirs, this is up there on the pedestal. Andrea is a fantastic writer, in my opinion, capturing the essence of trail hardships and vivid details of the landscape, all the while interweaving historical tidbits about Colorado and the trail. She hiked the trail in her 20s with her boyfriend (now husband) and in her 40s with their 3 boys (ages 11 & 15), so it was interesting to hear her different perspectives. And not for nothing, I give major kudos to anyone who thru hikes with kids or even dogs … hiking the miles and performing camp chores are trying enough without adding the extra bodies to worry about.

I finally read Bad Tourist by Suzanne Roberts, who is another author I connected with via Instagram because she released her book (2nd one!) around the same time as mine. Anyway, the collection of short essays from Suzanne’s globetrotting is unfiltered (full of booze and sex) and she has no shame in admitting and taking full responsibility for her shortcomings and vulnerabilities. She is undoubtedly talented in her storytelling, so it’s a quick, easy and engaging read.

A friend lent me John McPhee’s Coming Into The Country. I’ve never read anything by McPhee, but he is highly acclaimed, and I can see why. Yet his style is not my favorite. I admire his talent for capturing expressive and accurate depictions of life in Alaska among ordinary—yet extraordinary—people over the years. However, the scene shifts and transitions were hard for me to follow. Still worthwhile for anyone who likes learning and reading about Alaska!

Currently watching on Netflix/Hulu/HBO Max: Admittedly, there’s been a lot of streaming this month, which is a typical winter pastime!

Who else is on the “Inventing Anna” kick on Netflix? We blew through the 9 episodes. I loved the journalism aspect of getting the story, but it was also fascinating how first impressions and keeping up a certain image can really go a long way.

The other series we loved this month (on HBO Max) is really a null point because it’s no longer available, but we cherry picked through episodes of CNN’s specials on the decades (The Eighties, The Nineties and so on). It was very interesting to watch the snapshot/summary about music, TV and technology trends compared with living through it!