Last night, J and I went with some friends to the Banff Mountain Film Festival Tour that came through NH. These are not your regular films; these are for adrenaline junkies. We got to see a sampling of 8 films from the actual festival and they all involved mountain sports.

I like to think of myself as an adventurer–always willing to try something once and keeping life exciting. But the people in these films, they put my life adventures to shame! I know I can only do so much given money and resources, but J and I do crave something bigger and better in our lives. We hope to start by completing the AT, even though that still pales in comparison to other feats. Anyways, to say these films were inspiring for what’s to come is an understatement … kind of like only saying “the U.S. is in debt.”

Here’s a comparison of my life to some of the film characters.
Dominic Gill (Take a Seat) cycled some 20,000 from the northern most point of Alaska to the southern tip of South America on a tandem bike (he picked up random strangers as passengers) during a two-year period.
The furthest I’ve biked is 11 miles.

Roz Savage (Rowing the Atlantic) spent 103 days rowing her boat solo and without any support teams from Spain to Antigua.
I have never been kayaking by myself. Even in a pond.

Aaron Honnold climbed 2,000-foot Half Dome (in Yosemite) without any ropes (called free solo–mind-blowing, but insane and controversial) in under 3 hours. This was the best available link I found 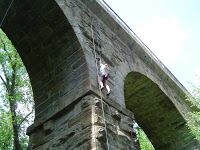 about him, but none about the film–First Ascent: Alone on the Wall.
The highest wall I’ve scaled was 70 feet and it was probably 5.6 difficulty (Half Dome is 5.12). With rope support.

We will definitely be attending the film festival next year … maybe even in Banff????