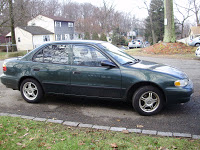 My car Fernando (or Isabella as J calls HIM) has been around the block once, twice, 14 million times. And here is his memoir. 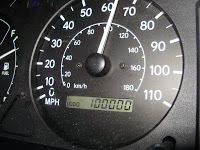 I bought Fernando in January 2002 brand spanking new in Arizona. He was born ghetto. After I signed the paperwork, the car dealership called and said they already put on racing rims and tinted the windows and they wouldn’t charge me, but is that okay? I was fine with that; surely tinted windows was a good idea in Phoenix! Little did I know that the rims and tinting would cause me angst later in life.

Fernando has had many hiccups in his life.

In November 2003, on Thanksgiving morning, I was driving to meet my running group at 6 a.m., which led to incident #1. I was actually on the phone with my mom wishing her a happy Thanksgiving (it was later on the East coast). So I’m driving and talking on my cell phone, paying full attention to the road–of course–and BAM! POP! POP! I may have dropped the F-bomb in my conversation with my mom.

As it turns out, I ran over some large metal piece that was lying across the road. The police came and a tow truck eventually arrived because Fernando was not driveable. As we were standing there watching the tow truck do its duty, the police said, “hey, doesn’t that metal piece you ran over look like it belongs to this tow truck?” Sure enough, the driver reported a loose piece that day and didn’t even know it broke off his truck just one hour before I drove down that road. As luck would have it, the same tow truck out of the umpteen that do rounds in Phoenix responded to my call! So, Fernando got fixed up courtesy of the towing company. But I swear he was never the same.

Also in Phoenix, Fernando got broken into. His tinted windows and racing rims looked like he was hiding some drugs or something, apparently. I’ve told this story before … the police tracked down the thief and he eventually paid me retribution for the damage (still waiting on the rest of that).

Next up, Fernando afforded one flat tire in Arizona and Connecticut, within a 1-year period. J and I used to take him off-roading a lot. That could be why.

Moving on to Virginia, Fernando got broken into again. The damn tinting and the rims. Or maybe it’s just the damn neighborhoods I chose to reside in.

Fernando had two other very odd incidents in Danville.

One time, I was driving with SILMeow and PrivateEye (a friend that was renting a room from us) and it felt like a bowling ball hit the back end of the car. SILMeow turned around and saw a deer running away. So naturally we pulled over to assess the damage. And couldn’t find any. All we found were two barely noticeable hoof prints and some deer spit above the wheel well. I could just picture the deer galloping into my car, then continuing on like nothing happened. 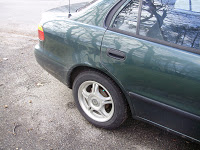 Next up came the time I was working at home and “heard such a clatter. I ran to the window to see what was a matter.” Some hillbilly was driving up our street with a truck full of metal crap and a piece fell out, right onto the edge of my car, cracking the bumper. Insurance paid out and I promptly put the money toward our wedding. Fernando could deal with his scar. 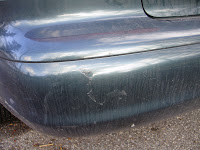 New Hampshire has not been as problematic, yet. There was the time another driver swerved into my lane and I swerved into the shoulder, hit a patch of ice and spun into the snow bank. Now he had a scar on the front too. No insurance money for that, sadly, but I did have to pay for a tow out. 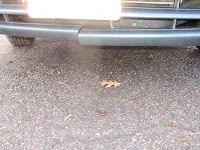 As you can see, Fernando and I have been through a lot. He’s driven me through at least 25 states and very extreme temperatures.

Anyways, here’s to another 100,000 for Fernando! He just a clean bill of health in September after getting new tires and a new voice box (horn). I have high expectations for him!