I’ve returned from my long-awaited and snow-delayed weekend in Philly and it was divine. Seriously, what’s better than girl time and good food?

I was visiting my college roommates—Chile and Charlotte—and 2 other friends from college—theChief and RedJeepTrvlr—with whom I worked on the newspaper. I stayed at Charlotte’s house. Some would say I picked the house with no kids purposely as my base camp, but the “no kids” part had nothing to do with it, I swear! I actually hardly got to see any of the kids this trip, which is a bummer! Seriously! They grow so fast!

Charlotte didn’t stop at anything to be an awesome hostess. The first night she took me to Wawa, a staple in Pennsylvania. I didn’t even know they served dinner there. I was blown away by the food, let me tell you. (In all honesty, it was not that bad).

Moving on, theChief, RedJeepTrvlr and I spent Saturday together. I did get to meet theChief’s little one, who incidentally is not so little (a 7-month-old fitting in 12m clothing). She’s going to be a mighty fine football player. 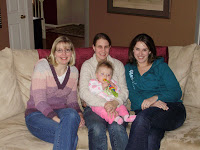 Saturday night, Charlotte made up for Wawa. She and her husband PA Dutch took me to a wicked cool joint, Half Moon Restaurant & Saloon, which has been featured on the Travel Channel and is known for its wild game! Now I can officially add yak, wild boar, ostrich and kangaroo to my list of meats I’ve tried. If you like meat and beer, this restaurant is a must-try. 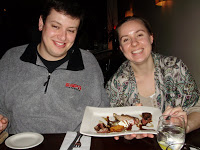 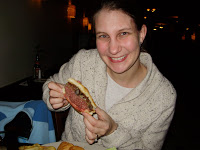 Chile joined us Sunday after an adventure in DC where she got 15 minutes of sleep the whole weekend. She somehow found her fifth wind and with the help of Charlotte’s magic fan, she was able to sleep a whole 8 hours that night.

We ventured to America’s Grill for dinner. Not only was the food excellent, but our server was HOOOOT and really awesome. Too bad he was 10 years too late for us! 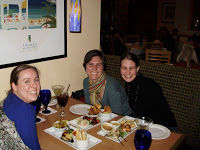 Of course he probably thought we were bitter, scorned women out together without our husbands on Valentine’s Day. Actually, there was a customer in the restaurant who might have thought we were involved in a ménage a trois. 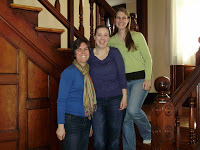 Charlotte’s new pad is ginormous (the spare bedroom I stayed in had 4 doors and I’m still not sure where they all led), so it was easy to escape to the West Wing and have an all-out pillow fight in our underwear without PA Dutch even knowing (cause that’s what girls do at sleepovers, right?).