You are here:
March 25th marks the one-year anniversary for my sister and her gastric bypass surgery.
My sister is 6 years my senior and even though we have our personality differences (her idea of camping is staying at a 3-star hotel), the biggest difference is in our looks. Most people can’t believe we are sisters. She has curly hair. I have straight hair. Brunette vs. blonde. Tallish vs. shortish. But, the thing that has always irked my sister the most is our weight difference. I was blessed with my father’s height and my mother’s awesome metabolism (she weighs 100 lbs soaking wet). My sister, on the other hand, was blessed with my mother’s height and my father’s big bones.

Weight was always a struggle for my sister. Growing up, she was always on a diet, all while I happily ate my Fruity Pebbles for breakfast, PBJ sandwich and twinkles for lunch and hot dog for dinner. We were both in sports, but it didn’t matter what she did. She would look at food and gain weight.

I always loved my sweets!! 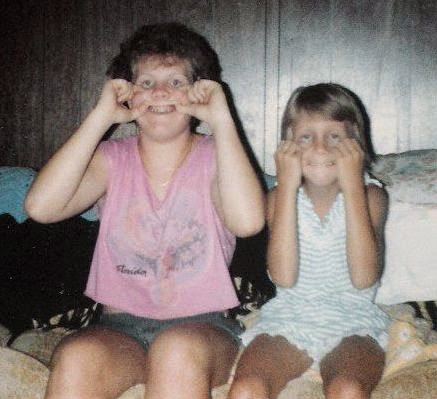 She tried every diet out there when she was a teenager and into her 20s. I can remember one time, she was on this 3-day protein diet, which included a beet portion everyday. She hated beets. I would “help” her out by eating one or two portions. It was the least I could do.

Her struggles with weight continued into her adulthood. Especially after 2 kids. This is not uncommon. Unfortunately, 35% of Americans are obese. Being physically active takes a back seat to everything else in life. Until New Year’s Day when it becomes everyone’s resolution. We make excuses. “It’s cold outside.” “I have to work late.” “It’s National Peanut Butter and Jelly Day.” (That’s a real holiday in April)

While I am blessed with a great metabolism, I do have cankles and some junk in the trunk that I try to keep under control. Anyone who knows me knows I don’t do so well on the eating side, but I love to exercise. And, even without kids, a full-time job, and a home to clean, I still find a way to make excuses. My exercise regimen is so schizophrenic, it’s amazing I can stay in good enough shape.
Over the years, my sister came to terms with her weight. She tried not to let it wage battle against her esteem. But, as the pounds added up the bigger problem became the comorbidities. She developed diabetes. She had sleep apnea. She had high blood pressure. She was morbidly obese. She knew she had to look into other options.

On March 25, 2013, she got the gastric bypass surgery and has had great success. I thought I would conduct a little Q & A with her to commemorate her one-year anniversary and to tell her publicly how proud I am of her. Feel free to give her a virtual high five yourself.
How much weight have you lost?
75 lbs and counting 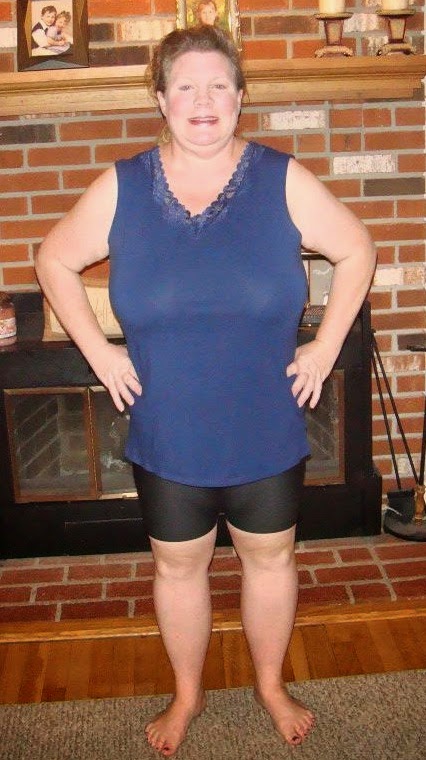 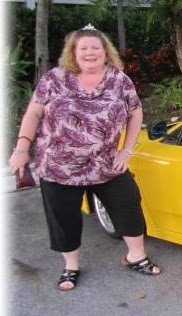 Before and after losing 75 lbs

What’s the update on the other medical conditions?
I no longer have sleep apnea and don’t have to use a CPAP machine to help me breathe at night (we used to call her Dark Vader). No more blood pressure meds, fewer diabetes drugs. My A1C dropped from 10 to 7.2 in 9 months. I am hoping to get rid of the diabetes next and my endocrinologist thinks my A1C will hit the target in another 3 months!
Why did you have the surgery?
To get a second chance at life.
What was the most surprising thing about the surgery?
They say you will feel fuller after such a smaller amount of food and I couldn’t imagine it. Well, it is true. I am really not that hungry and I do listen to my body when it tells me that I have had too much to eat. Prior to surgery, my body could hold up to 4 cups of chewed food. Now it can only hold up to 1 cup.
What foods can you no longer eat that use to be your favorites?
I used to love burgers, pizza and pasta. I have yet to eat pizza, have only had small amounts of pasta and can only eat a slider.
How do you feel physically?
I started working out again after the surgery–riding a bike, using a treadmill, playing tennis, swimming, trying out some aerobics classes. I hadn’t done these activities in over 12 years (except the swimming). I have more energy and endurance.
How about mentally?
I have zero regret about getting the surgery. Not having any complications helped. But, this was definitely the option that worked for me to get on top of my weight! So happy to be healthier!
What’s your goal for the future (in terms of health)?
I would like to get into a more consistent exercise regimen. I ordered T-25 (a modified version of Insanity) and want to commit to the 10 weeks to tone up. Now that it is on the Internet, you better do it!! I also want to get rid of the diabetes!
Categories: Blog Post, PostsBy plavigneMarch 24, 20143 Comments
Tags: FamilyReflections