In 2016, Justin wrote extensively about Crohn’s disease, a disease he had since his teens (see links below for full stories). It’s truly a hidden disease. Justin lives with a broken body. However, he doesn’t like to let the disease rule his life. Few people would ever know he has it and that’s why I think it’s so important for him to share his journey more publicly.

The last time he wrote about Crohn’s, it was January 2017. He was still recovering from his first surgery and antibiotic treatment for a spine infection. He had a temporary colostomy bag. Two years has passed and so much has happened. He has proven that the disease doesn’t rule his life. So to tag onto the 3-part series he wrote in 2016, I am forcing him to do another post. The story gets personal, and may be TMI for some people. Be warned.

And now I’ll turn it over to Justin …

Did you know it is national Crohn’s and Colitis Week?  Do you know what Crohn’s and Colitis is?  Most people don’t and if you do you know, you know how bad it can be.  Most people know it has something to do with the bowels and things not working quite right.  It is an incurable disease that attacks the digestive system, causing abdominal pain and a slew of other intestinal issues.  It can wreak havoc on ones’ body, daily living routine and your mental health. 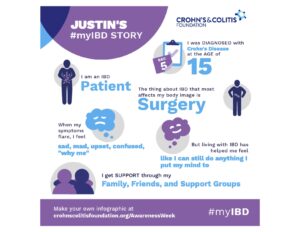 Patrice is right.  I do hide it and only a select few know. Putting it out on our blog for anyone to see is scary to me. I have had it for 25+ years, but it does not rule my life.  I have done some extraordinary things while struggling to stay healthy.

This most recent part of my Crohn’s journey began late April 2016 when my GI doctor called and said an MRI of my intestines revealed a mass and a strange growth near my lower spine. He told me to immediately stop everything and follow up. The thing is I felt good and I had some plans. I was days away from leaving for my first expedition to climb Denali. I completed the follow up scans the day before I left for Alaska, but knew I wouldn’t get the results until I returned. I won’t go into those details since you can read them in “Part I.” It’s been a long 2 years since my first surgery in 2016. I’ve had 2 more surgeries and a change from the colostomy to the ileostomy bag, and now reversed for hopefully normal intestine function. So there’s a lot to catch up on.

Not only was recovery from surgery really slow and hard for me to accept, life with a bag was the opposite of fun. It definitely threw Patrice & I for a loop in the beginning. All of the sudden, my disease was visible to me everyday. It’s not that I had to give up my lifestyle, I just had to make adjustments. Having something attached to your stomach was obviously challenging. I couldn’t sleep on my stomach and sleeping in general was harder. I didn’t feel comfortable enough to put on a harness to go climbing, but I didn’t give up backpacking. I had to readjust my backpack waist belt and ease into carrying a load. When I slapped on a harness for a few climbs, I surprisingly didn’t experience any issues. 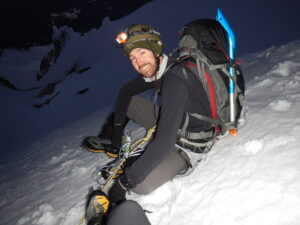 Yep, there’s a bag under that harness.

I also really started to think about what I was eating. The bag diverts intestines, meaning my food doesn’t break down as much as it would normally. Some foods that used to be fine disagreed with me and I was nervous about blocking up my intestines. For the most part, I stayed away from nuts, raw veggies (they had to be mush for me to eat them), seeds, dairy & gluten. I guess the other challenge was my stomach would make weird noises & I couldn’t control them. I was a little self conscious at first, but then I just got used to it.

We spent the summer of 2017 living on the road for our New Zealand Speaking Tour. We lived out of the Superfeet converted Sprinter van (with no bathroom) and drove 14,240 miles giving presentations around the country. We ended up hiking about 150 miles, including a few multi-day backpacking trips. 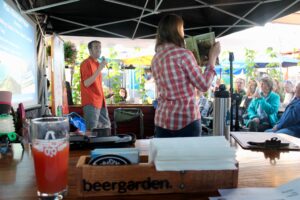 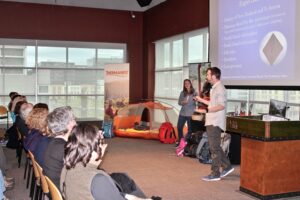 I was always thinking during presentations, I hope my stomach doesn’t make any funky noises.

Life with a bag became manageable, although I was still hoping it was temporary.

This is where things get complicated.

My original surgeon decided the colostomy bag wasn’t going to be temporary. It would be permanent because I still had the spinal bone infection in my sacrum area. The rounds of antibiotic treatment didn’t kill it. The infection was dormant, but still present and too close for comfort to my intestines in question. My surgeon thought if she reconnected me it was too risky, could reactivate the infection.

She felt really bad and both Patrice and I were deflated by the news. But we started to accept the bag life. Like I said, I got pretty used to it and didn’t limit my activities too much.

Regardless, I had to have another surgery to make the colostomy permanent. And my original surgeon was too nervous to go back in and work closely to this infection. We had full confidence in her, but she wanted us to get a second opinion from a colleague of hers, so referred us to the University of Colorado.

In our first appointment with this new surgeon, he questioned why I would have to keep the bag. He was adamant my intestines were healthy enough to be reconnected and the spinal infection was not a problem. This was a 180-degree different view than my previous surgeon, with no disrespect to her. He even said there was a solution for my bone infection & referred me to an orthopedic surgeon.

More appointments, tests and discussions later, these new colorectal and orthopedic surgeons had a plan! They would do surgery in February 2018 to start the process for reconnected intestines and no bag. Without getting too technical, the colorectal surgeon was going in to reconnect my colon to my rectum and temporarily change the colostomy to an ileostomy, diverting my intestines again so the newly reconnected area could heal. The orthopedic surgeon was going in to place antibiotic beads around my sacrum, which would dissolve into the porous bone and really hit the bacteria at its source!! We had new hope, but weren’t counting on success.

On February 13, 2018, I had my second surgery. It lasted a little over 4 hours and was a success. My colorectal surgeon reconnected my colon as planned. The orthopedic surgeon debrided (basically burned) the sacral area to remove the infected area as much as possible. It actually ended up being the size of a peanut!!! Recovery was tough. Once again, I learned that recovery is a million little accomplishments, instead of focusing on the big picture. 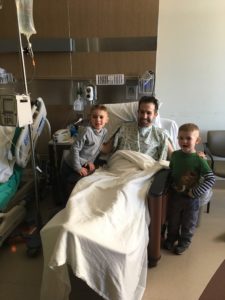 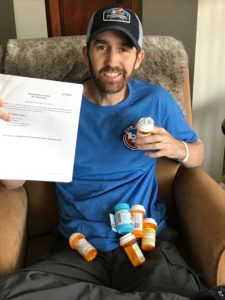 I returned to bag life, although life with an ileostomy bag was more challenging than the colostomy bag. Things ran right through me, so being close to a bathroom was more important. Also, because my bag filled up so much, I had more issues with leaking and changing the bag. I’ll spare those details, but let’s just say, we’ve become pros at the quick change and I can proudly say it can be done at a random pit toilet rest area in the middle of Canada and even the passenger seat of the car. Not to mention MANY times in our tent, even in the middle of the night in the backcountry!! 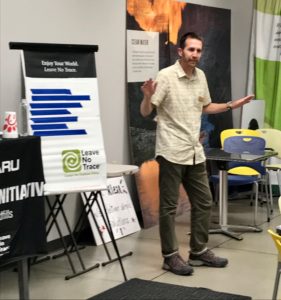 We planned my 3rd surgery to reverse the ileostomy for October following our summer contract job. And on Oct. 22, 2018, I had my ileostomy take down. 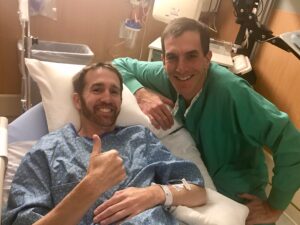 Going to the bathroom like a normal person is a gift. I am still trying to balance everything out and definitely continue to have bathroom challenges and feeling unwell. Everyone keeps reminding me I am only 2 months out from surgery. Recovery never happens fast enough.

I’m obviously not out of the woods. Crohn’s is a lifelong disease. But I feel like this 2 years of hell is behind me and I can take back full control of my life. Patrice told me a quote recently and I do think it rings true for this experience.

“Dear God, Thank you for letting this happen to me. I wish it hadn’t and it was terribly difficult, but I know I learned something.” (BTW, credit to ultra marathoner David Horton quoted in Jenifer Pharr Davis’s book The Pursuit of Endurance).

Crohn’s will always be my hidden disease, but I hope to inspire others with similar diseases to know that you can still try to live the life you want with minor adjustments. I hate admitting I have a chronic disease, and most people would say they would never know it about me with all I do. I always wanted to prove where there’s a will, there’s a way.

Number of days living on the road: 260

States driven thru: 36 (and to Alaska)

And now if you’ll excuse me, I need to get back to training for my upcoming climb of Denali … happening on May 13, 2019, just 6 months from now.

Justin previously wrote a 3-part series chronicling his journey with Crohn’s disease so far. The first post was focused on J’s history of Crohn’s from his perspective and the second post was about his Oct. 18 surgery and the 10 days in the hospital that followed.  The third post was about the start of his recovery and life with a bag.