We’re still on our quest to hit all the breweries in VT, but we also don’t want to miss the ones in NH. So this weekend, we ventured to Keene to the Elm City Brewery. The main reason we went to Keene, though, was to see a jam band Railroad Earth in concert. The lead singer, Todd, is an old friend of J’s and he used to play in a band called From Good Homes. J saw FGH play about 200 times!!! It’s funny because we’ve seen RRE play in Phoenix and Raleigh, and every time J shows up, Todd is like, “dude, you live HERE now?” 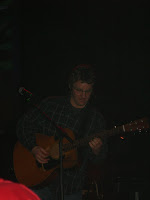 We got home around 2ish and were supposed to leave at 7 this morning for a casino trip that J planned for his town. The bus company called around 4:30 (yes A.M.) to cancel because of an impending storm. So J had to call the 30 participants at 6 (yes A.M.) to tell them it was a no-go. And wouldn’t you know it, the snow started later than the weatherpeople predicted, so we probably could have gone afterall. Oh well!

We are watching the Academy Awards, and for all those who care, we are still trying to make it through that lengthy list of Oscar winners, the very long-term goal we set last year. We’ve made progress, but I’m talking years. Maybe decades.