Our day started with a lobster hangover. With so much to do in NH, we wanted to make the most of the day before hitting the beerfest. So we settled on Franconia Notch State Park. TheHoss and Accessory were impressed. 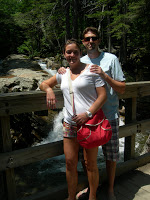 We looked and looked for the Old Man in the Mountain, but he was still missing. Guess we are 6 years too late … 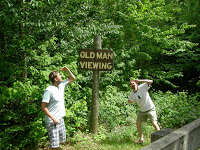 After filling up on yummy food at Woodstock Brewery, we headed over to the Old New England Brewfest in Lincoln. And it did not disappoint. I was DD, but it was still a really fun atmosphere. By the end of the night, the rest of them probably had about 30-40 beers each (okay, they were only 3 ounces). Good beer and we met some cool people too. J and theHoss had a competition to see whose t-shirt would get more comments and Duck Tales Woo Hoo beat out More Cowbell.

Our visitors leave tomorrow (along with me for a business trip) and we are visitor-free for at least 2 weeks. We won’t know what to do with ourselves!!! I’ll leave you with picture of the rainbow at Brewfest. 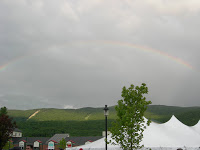