In the running for best wedding (for someone else) ever, definitely most memorable

Published May 26th, 2010 under Road Trips  Weddings - one response

So the Hindu wedding this past weekend. OMG. So so awesome. I was holding off on my blog post because I was hoping to get some video up, but my play by play will have to do for now because figuring out technology just kills me. So here is an education on Indian weddings, if you will.

J & I left NH Sat at 6am to drive down to NJ. 5 hours and 30 minutes later, we were there. Had a short rendezvous with family (but I will post that some other time), then the ceremonies started at 2ish. I did not mistype ceremonieS. Hindu wedding ceremonies normally extend for several days, but this took place during one day only.

It started with Mr. Clean (the groom & J’s friend) clad in a sherwani (long jacket), churidars (fitted trousers) and a sehra (turban) getting on a horse to meet the bride’s family. Since we were not used to seeing him in such outfits, we had to chuckle and call him Aladdin. I know, so immature and disrespectful, but you have to know this group of friends to know it was inevitable. 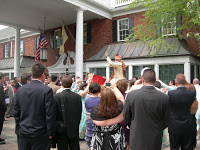 I heard he was supposed to come in on an elephant, but the big white decorated horse was still fine. He mounted and we all bollywooded our way to the bride’s family. No, really, we bollywooded, I swear. The bride’s family poked and proded Mr. Clean to see if he was fit for their daughter. Apparently he was because we moved on to the next step.

The rest of the Hindu ceremonies were extremely fascinating and confusing at the same time. A lot of oooommms and words we did not understand. A lot of “now place your hand at a 45 degree angle on the bride’s elbow.” Something about an auspicious day. Seven steps. Tying of the hands. Applying paste to a forehead. Circling the fire a number of times. Pouring water on each other. Practically every unique thing you can think of happened during this time. I’m happy to have witnessed it all, even though I am still perplexed by it.

During the course of the ceremonies, the bride changed 3 times. She started in a beautiful red and gold sari draped over her head, then a white wedding gown and then back into the red and gold sari (it might have been a different sari than the first actually). Side note, the bride’s family went to India to pick out the traditional colorful outfits for the entire wedding party. 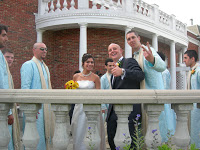 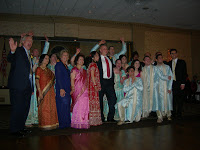 At the reception, I continued to see things I’ve never seen or heard of. The sister of the bride and her husband did a dance performance for the bride and groom (QuickQuestion & Yankee, you owe us one). The mother sang a song to her daughter. There were a lot of performances. Not as many bollywood performances as I would have liked, but they had a pre-wedding celebration full of this dancing on Thursday and unfortunately, we missed it. The reception also involved a lot of speeches from family members and friends. 90 minutes of speeches to be exact. We were fully expecting that every single person was going to end up standing and giving a speech.

The food was all Indian, of course, and family style at the table. I do like Indian food, thankfully, but there were definitely some items I never want to try again. None of us really knew what we were eating and acknowledged the fact we’d be drinking a whole bottle of Pepto later, so most of the conversation went like this: “Can you pass the stuff that looks like refried beans?” At least there was naan. Who doesn’t like naan bread? That was the fail safe.

The whole thing was so memorable. There were over 400 people there, so I actually never got to meet the bride. J either. I can only interpret all the parts of the lavish ceremonies and reception, the performances and the speeches as an incredible showing of support for the bride and groom and awesome tradition that is clear in the Hindu culture. It actually puts our “American” wedding celebrations to shame. I am glad to have checked this off my bucket list and of course it was great that we were there with so many good friends. 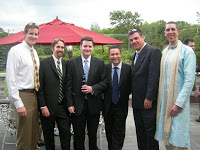 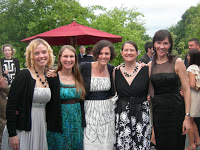 One response to “In the running for best wedding (for someone else) ever, definitely most memorable”