You are here:
During the past 5 months, I read 15 books and J read 10. It may not seem like a lot for some people, but it was for us. We love to read, but when we’re on the road, we listen to a lot of audiobooks and podcasts. Our summer and fall caretaking gigs afforded us actual book reading time, so we made it a point to devour some titles that have been on our list for awhile. 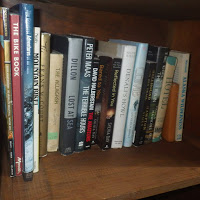 Patrice told me she read this in college and loved it, so when we saw it in the church library in Maine, she made me put it in my pile. I agree; it was a great story about how a young man from Ireland made something of himself in the United States.