Exploring Oregon: Mt. Hood and Beyond

In late May 2014, he and his climbing partner Bobby (Bolt) attempted to climb Mt. Hood. They were essentially climbing inside a ping pong ball, with all the snow causing whiteout conditions. It was dangerous and taking way more effort than it was worth. They abandoned the climb about halfway up. 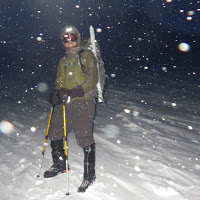 In planning our summer adventures and knowing we would be going through Oregon, Hood had to be on the list. So we made arrangements with Bolt and his wife to rent a condo for a few nights, one of which would surely be a great night for them to summit.

Now, Mt. Hood is the highest point of Oregon. And since it is also MY goal to at least attempt to climb as many state high points as possible, I also had to give it a try. But, it gave me great anxiety to think about climbing with J & Bolt. Not only is their stride 15 times mine, my mountaineering skill set is way beginner. Hood can easily be a one-day event and is not a terribly technical climb, although you do need your ice axe and crampons (spikes for your boots) because it is dangerous (people have died this year!!!). In fact, it is known as the second most climbed glaciated peak next to Mt. Fuji. Still, I needed to do this on my terms. But, I didn’t want J & Bolt to be having to worry about me and my skills or wait on my slow pace.

So here we have a tale of 2 climbs. One team summited, one team did not. I think you know where this is going, but read on.

On Saturday, May 20, fresh off my grueling climb of Mt. St. Helens, I met with Timberline Guides  and my team for “snow school.” That’s where they teach us all the proper techniques for climbing–footwork in mountaineering boots, crampon and ice axe techniques, rope systems and self arrest. It was a great reminder, as I haven’t used some of this equipment since my Rainier attempt in 2013.

Our team of 6 clients and 3 guides would meet at 2:30am Sunday morning, so I scurried back to our condo to visit with everyone before attempting to grab a few hours of sleep.

I was insanely nervous. Mountaineering gives me great anxiety. I shoveled a half a banana down and called that energy (not my smartest decision). The way you climb with a team is that you climb steeply for an hour, then take a break. Guided teams take a snowcat halfway up the mountain, so it’s really only about 3 miles and about 3,000 feet of elevation gain. Should you think this sounds easy, remember, this is not hiking. This is climbing, so 10 times the effort.

Immediately at break 1, I felt nauseous. Of course it had to do with my measly breakfast, but also the fact that Mt. Hood is a volcano and there is a strong sulfur smell (aptly named Devil’s Kitchen). By break 2 (Hogsback), I felt worse and told my guides. I tried my hardest to eat bits of food and water. By break 3, I didn’t feel any worse, but not any better and updated my guides, making sure to note I really wanted to summit. I knew I could work through the nausea. The day before, Justin gave me some really good advice. “As soon as you really start to feel miserable, it will be over.” I knew he was right. 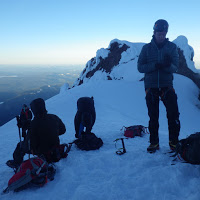 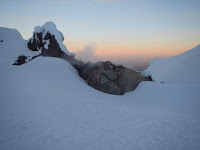 At the next break, we were dropping our trekking poles and roping up. This was going to be the moment of truth if the guides would let me climb.

Well, I got really lucky. Since we had 3 guides and 6 clients and they never rope up more than 3:1, one guide (Jeff) said he and I would be on a rope alone. This meant we would be in the back of the pack and could go slow and could turn back if need be. At this point, though, I knew I could summit.

The mountain just keeps getting steeper and steeper and our last pitch was vertical climbing. Like literally, you use your ice axe to dig at last one strong hold into the ice, dig the front points of each crampon into the wall and hoist yourself up. 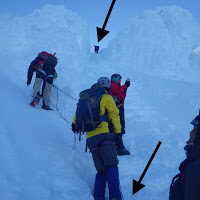 It’s really hard to describe what is between the 2 arrows, but it is something like a 75-degree angle and maybe 100 feet height. All I know is it felt like vertical climbing to me; I had to dig my front points of my crampons and ice axe in to make any forward progress! 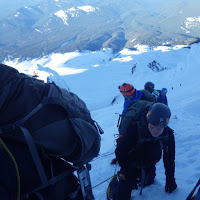 Looking back to where we climbed.

Once over the lip, it was a short ridge walk to the summit and I was beyond excited. 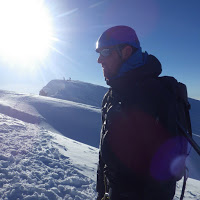 Just a short ridge walk to the summit … and that’s my guide, Jeff!

You have cell service all the way up and down Mt. Hood, so once I reached the top, I texted J to say we reached the summit at 7:34am. He was elated for me of course! 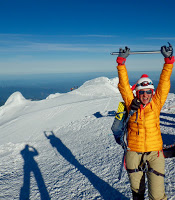 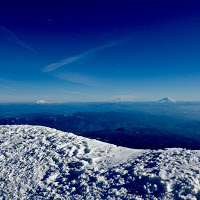 Views like this are the only reason I admit I like climbing … seeing the peaks of Mt. St. Helens (left), Rainier (middle) and Adams (right) above the clouds is amazing!!! 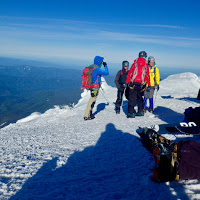 All of my team made the summit!

Getting down is no easy feat, and that’s the main thing you have to remember about climbing mountains. Getting to the top is optional, getting down is mandatory.

The whole climb took about 9 hours. I am glad I summited, obviously, but it confirms what I already knew: I dislike any kind of mountaineering. If the activity involves crampons, ice axe and mountaineering boots, I’m better off to avoid it!

Anyway, when I reached the parking lot after my climb, it was just about the time J & Bolt were leaving the lot to start their climb. Since they did not have the luxury of taking the snowcat in the middle of the night (only available to guided groups), they took the ski lift halfway up to camp, ensuring they can have an alpine start.

So this is what you need to know about Mt. Hood’s conditions in May 2017. The weather was the exact opposite of J’s whiteout snow conditions from 3 years earlier. It’s been extremely warm on the mountain. The freezing level was somewhere above 13,000 feet. The crevasse has opened way earlier than years past. Melting snow also equals increased avalanche risk. The day I climbed, it has been warm (40s), but windy, keeping the snow pretty solid. Even still, my guides commented on how slushy the snow was getting when we were coming down in sunlight.

The warming trend continued during that day, so when J & Bolt made camp, there was no overnight freezing. They immediately noticed soft snow as they started climbing around 2am. (All photos from J’s climb are from Bobby/Bolt) 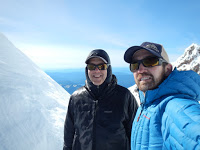 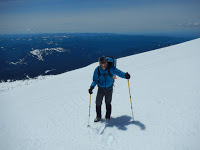 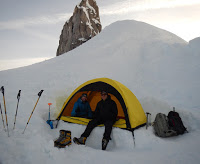 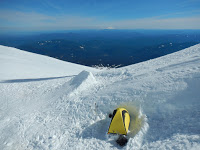 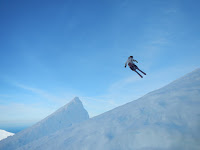 That is not Justin or Bobby. Some locals built a ski jump close to where they camped, so they had entertainment for the night! 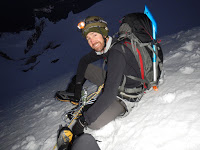 Another cool thing you can see when climbing: the shadow of the mountain as the sun is rising!

As they reached the Hogsback, they could actually hear snow falling around the next steep section. Sounds of a waterfall on a mountain are never good. There were a few other teams up there, and all of them were turning back. J & Bobby got to the vertical pitch at 5am and immediately agreed it was unsafe. They could potentially make it up, but as the sun rises and warms the mountain more, getting down would be too unstable.

So they turned back. 300 feet from the summit. Oy vey. That darn Mt. Hood. 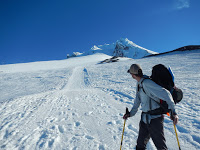 “I will be back,” Justin says.

Otherwise, we enjoyed our condo in Mt. Hood and in between everyone’s climbing expeditions, we enjoyed visiting with each other, catching up on laundry and other life items. It is always nice to stand still for a few moments while immersed in the chaotic road life. 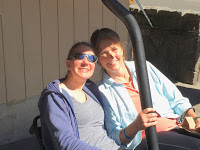 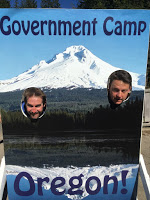 3 responses to “Exploring Oregon: Mt. Hood and Beyond”