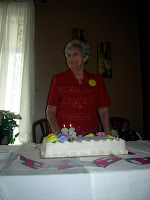 A few weeks ago, my Nana (my mom’s mom) turned 86 and we got the WHOLE
family together to celebrate. The majority of my extended family lives
in New Jersey, but there are a few exceptions like myself and my sister.
I also have an aunt, uncle and cousin who live in Alaska, cousin in
Seattle and cousin in Minneapolis, so you can see why getting everyone
together is a rare occasion.

My Nana has 4 children, 12 grandchildren and 3 great-grandchildren. My
sister is the oldest grandchild at 39 (I hope she doesn’t kill me for
revealing that … almost 40, gasp) and then I come next. The youngest
is 16. My extended family is very Italian and with my sister & I
clearly do not fit in with our blond (ish for her) hair and fair skin.
There is only 1 other blond among all the cousins!! 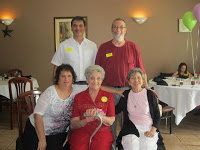 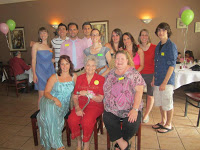 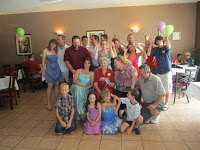 I love my Nan and all her Nanisms. If I had to nickname her, it would be Cost Cutter and I definitely attribute some of my frugality to her teachings! Always on the lookout for a bargain! She has also shown me great strength over the years as she took care of my Pop Pop in his ailing health from 1979 to 2004 when he died. That is dedication and commitment!

In any case, it was a nice family reunion and to revisit my roots at the Jersey Shore. Yes, the real Jersey Shore where the MTV show is filmed. Growing up, I affectionately named it Sleaside (real name is Seaside). Name and reputation aside, the boardwalk is filled with TONS of childhood and teenage memories for my sister and I. It was nice to share it with my niece & nephew (even though there was a wicked, somewhat scary, storm while we were on the boardwalk!). I am proud that Curly Locks has followed in my footsteps as the queen of Skeeball!!! 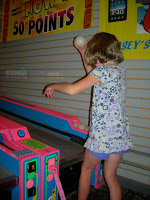 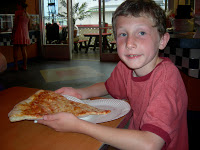 On a side note, after the reunion, the family from Alaska went to Phoenixville, PA, for Blobfest to celebrate my aunt’s 60th birthday. If that alone wasn’t cool enough, they ended up on TV!