Visiting National Parks is something J and I have done … a lot. We’ve been to 37 of the 59 parks (yes, we are keeping track) and dozens of the monuments. And as America celebrates this centennial anniversary of the day President Woodrow Wilson’s signed the act to create the National Park Service, it is amazing to see how much the organization has grown.

J & I try to make a habit of visiting parks during their off season, rather than braving the crowds, because, well, jam-packed parks during the centennial celebration is an understatement.

This past road trip, however, we hit Yellowstone, Grand Tetons and Theodore Roosevelt National Parks, as well as Devils Tower National Monument. We were really gluttons for punishment by hitting two of the most popular national parks (Yellowstone and Grand Tetons) during the peak season. The thing is, when we were driving from Outdoor Retailer in Salt Lake City to the Highpointer Convention in Montana, the most direct route–let alone the most scenic route–were through those two parks.

Granted, we didn’t go see Old Faithful (wall-to-wall people!!!) and breezed through, but Yellowstone still stands to impress with all its fumaroles, mudpots and geysers. 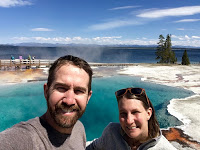 Yellowstone became the world’s first national park in 1872. The National Park Service has its work cut out for it in preserving this one.
J had been to to Tetons before, but for me, it was a first.  And when we turned the corner from Jackson and caught sight of the jagged mountains reaching for the sky, I was amazed.  This place is a climbing mecca, so I am sure we will back to scale some of these bad boys, well at least J will be.  I may cheer from basecamp! 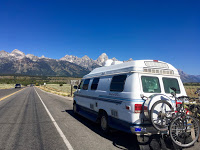 Further up north, we visited the less popular Theodore Roosevelt National Park in North Dakota. This park feels like sleeper park. It does not receive many visitors (about 600,000 per year compared with the 4+ million Yellowstone gets). Mostly because it’s so far out of the way. The park is spilt into two units separated by about 60 miles. We felt like we had the whole north unit to ourselves as we walked through the dense juniper forest to the open plains overrun by bison and prairie dogs (there are pockets of the park called “prairie dog town” because there are hundreds of them). The south unit is certainly more popular, but both parks had scenic drives that let you see as much as you can with pullouts or hikes into the unknown.

Besides the lack of overcrowding, another reason to hit this park is because it is where Teddy Roosevelt first visited and fell in love with preserving wild spaces. The park highlights his history and accomplishments. He became known as the “conservationist president” with a legacy that includes creation of the US Forest Service and establishing 5 national parks and 18 national monuments. If he were on this year’s presidential ticket, I’d certainly vote for him. 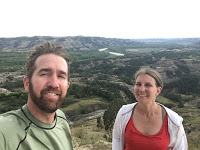 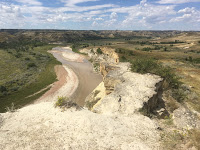 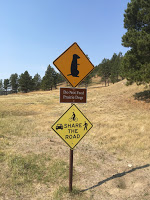 Last, but not least, we stopped at Devil’s Tower National Monument in Wyoming. This was a quick visit to see the phenomenon of the 867-foot tower sticking up from the ground. Roosevelt designated this prominent butte as the country’s first national monument 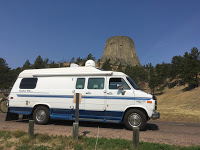 All the parks were mobbed given the timing of the centennial. The thing is, I’m pretty torn about seeing the masses enjoying the outdoors. Far too many Americans opt for indoor activities versus outdoor recreation. So getting people out and about to enjoy Earth’s bounty is an awesome thing.

The problem is that people are often irresponsible users of the outdoors. I have been a culprit of it myself from time to time, so I am not pointing fingers. But it definitely pains me us to see people disrespecting nature and we saw a lot of that on this trip, unfortunately. 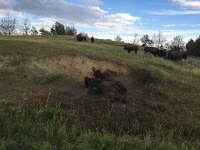 This is why J & I became Leave No Trace Master Educators in 2014 and now take jobs like the one at Fenton Ranch in New Mexico where we instill lessons about respecting nature to young schoolchildren. We have both learned so much through Leave No Trace about being good stewards, things we didn’t know during our early days of backpacking (I wish I could go back in time and have a talk with myself …) All it takes is a little education and an open mind from the user!

Okay, I’ll get off my soap box now. But, I’ll leave you with a quote I saw recently that really rang true for our passion. Happy birthday NPS!
“This is what we can promise the future: a legacy of care. That we will be good stewards and not take too much or give back too little, that we will recognize wild nature for what it is, in all its magnificent and complex history – an unfathomable wealth that should be consciously saved, not ruthlessly spent. Privilege is what we inherit by our status as Homo sapiens living on this planet. This is the privilege of imagination. What we choose to do with our privilege as a species is up to each of us.”
– Terry Tempest Williams
Categories: Blog Post, PostsBy plavigneAugust 26, 20163 Comments
Tags: National ParksOutdoor Recreation