Inflamed, Yet Untamed: My Crohn’s Story Part I

You are here:
This post will finally bring our blog reader up to date on Justin’s health and recent events. Justin actually tries to stay very private, despite the fact we have a public blog! With a little prodding, I told him he had to share his story. It gets personal and may be TMI for some people. Be warned. This is Part I of a 3-part series.
As far back as I can remember, I had constant pain in my stomach. I would keel over and wrap myself in a ball, pushing my knees as hard as I could into my stomach.  It was the only way to ease the pain. My mom said I was colicky even as a baby, but little did she know what was to come.

I was her first, and her favorite!
I always had to run, literally run, to the bathroom. Unlike most people, it was very hard for me to hold it.  I would panic and rush like Wiley Coyote to make it to the bowl.  I was lucky because my bedroom was closest to the bathroom.  But living with three females (my 2 sisters and mother), you can imagine the high occupancy of said bathroom. My sisters would pound on our single bathroom door, but it was the only place I felt relief, so I spent hours in there.

Women have always ruled my life!
I tried hiding my pains and problems from my mom.  But moms know best and she was onto me. Months and months of doctors appointments trying to figure out if I was allergic to something, lactose intolerant, sensitive to certain foods … It seemed no one could answer my burning question…
When I was 15 years old and after my umpteenth appointment, a doctor had the answer.
“You have Crohn’s disease.”
My mom and I looked at each other and said great, now we know what it is, so lets fix it.  But no, we soon found out this would be a lifelong battle.
For most of my teenage years, I cycled between prednisone prescriptions (steroid for inflammation) and hospital visits.  I would feel great when on my drugs: high energy, eating better, but than BAM!  It would hit me—a huge flair up.  I think I spent more time in the hospital my junior year of high school than in school.  I was often hooked up to IVs with meds and nutrition.  I was actually awarded “most courageous student.”  At the time, I was embarrassed to receive this in front of all my peers.  Only a small amount of my closest friends actually knew what was going.  But one friend, who still is one my closest, was so proud of me and gave me a huge pat on the back.  Looking back on that award, I did deserve it.  Even when I was down and out with my condition, I worked hard trying to get good grades, participating in sports and keeping a social life.  High school was tough, but I survived.

My friends were a good support through high school … and still are.
I was psyched to go to college.  I was on my own.  In my own room, hundreds of miles from home, and there were girls everywhere! (FYI: I went to an all-boys high school).  I was still on a variety of Crohn’s meds, but having all this freedom was tempting.  I drank, ate hot wings and just did not take care of myself enough.  Flare ups happened and I would just deal.  I returned back home every couple of months for check ups.  I remember the day after the From Good Homes show at Pingry High School on 5/16/97, I got sick and ended up in the hospital for some time.  In fact, I was pretty sick at the show, but could not miss it.  And of course, I still made it to the Bucknell show the following week!  I think music was my best medication.  During my junior year of college, I moved to Florida for a Disney Internship and worked hard, but also partied hard. Thankfully, I made it though. My 4.5 years of college passed with minor issues, nothing like High School.

Florida: My days were filled with sun and beer.
Then I moved back to good ol’ NJ and worked at skilled nursing home as a therapist.  I was back with my high school buddies, had a great job and was living with my mom.  I don’t know if it was work stress or my lifestyle, but I started having problems again.  More doctors appointments, changing meds, test after test.  They put me on a new IV treatment called Remicade (it really helped).  For those two years, I was hurting and in and out of the hospital.  But towards the end, I was doing much better and had another life change ahead of me.
I was going to graduate school!!  I moved to Arizona to get my Masters degree at Arizona State University, wanting to better my education and get a job in the outdoor industry.  No more distractions, no girls and work on “me” time.  But then I met her, the person that would change my life and help me improve my health.

My angel
Patrice had her head on her shoulders and together we fixed me, well tried. At that time, my health insurance expired and I was running out of my medication. Patrice worked as a medical researcher/writer and was so excited to use her knowledge to help me find alternative methods. I started eating a lot better, drinking a lot less and exercising more. Patrice and I identified my trigger foods (salads, nuts, seeds) and stayed away from them.
To my surprise, my Crohn’s really started to go into remission and continued into my 30s. I had stopped meds for years. My flare ups were explained, either by eating the wrong foods or drinking too much beer. I even noticed I could eat salads again! I had regular colonoscopies, with my last one in 2011. My doctor advised me that I still showed fistulas on my small intestines, but I was indeed in remission. He knew we were leaving to thru hike the Appalachian Trail and said I could wait 3 years to do another colonoscopy.
Three years passed and I felt great! We had completed two thru hikes and I hardly had any flare-ups, which was great because we were living a very nomadic life and our health insurance was based out of Virginia, a state we visited once a year, if that.
In the fall of 2015, I started to feel stomach pains and pressure again. It was a little different than my previous flare-ups, because it felt like it was centralized in my back and legs, like a sciatic nerve problem or something. We were still nomadic, but knew we’d be claiming residency in Colorado starting Jan. 1, 2016, so I decided to wait until then to find a new doctor. I once again resorted to identifying trigger foods and found going dairy-free helped.
I had my first colonoscopy since 2011 in March 2016. The inflammation was so bad in my intestines, I had to fast for 4 days for it to be effective. My GI doc was displeased with the results and sent me for a CT scan in April to get a closer look. Still displeased and not sure what he was seeing, he ordered an MRI in May.  He was still not sure what this inflammation was, but fairly certain it wasn’t cancer.
If May 2016 sounds familiar for a big event, it should. It was the month I spent 23 days climbing Denali in Alaska. Just days before I was to leave, my doctor advised me not to go.  In fact, he said if I climbed, there was a good chance I would not come back.  Our motto is “you only live once,” so we both agreed that Denali was worth the risk.
I felt great on the climb, but knew there was this lingering and unanswered medical issue weighing on my mind. When I returned to Colorado in June, my GI doc said, “wow, you’re alive” and then said the inflammation issue was really out of his field and referred me to a spinal surgeon.
The spinal surgeon took some guesses as to what was going on, but still did not have a solution. He thought my small intestine was so inflamed from the Crohn’s that it fused itself to my sacrum. He thought maybe I had a bone infection, or osteomyelitis. He did not think his kind of surgery was the answer, so referred me to an infectious disease doctor.
Did I mention how hard it is to get in to see new doctors? I finally saw an infectious disease doctor in August, who sat me down and told me that what he saw on paper was very different than who he was seeing in person.
“I was expecting to see a feeble, pale man,” he said. “Are you sure you really just climbed Denali?”
He confirmed there was probably a bone infection, but what type was in question. And he really couldn’t treat the infection with antibiotics until the source of the problem was cut off. He referred me to a colorectal surgeon.
She finally gave me an answer.
“I have to cut you open, remove the diseased intestine, then we can see what’s going on in your spine. I really can’t make any promises and speculations until I cut you open.”
Life is funny how all of the sudden you have no choice but to put your complete faith in a complete stranger.
Surgery was scheduled for Oct. 18, 2016.  Today was my 3 month anniversary. 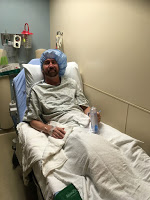