Currently worried about: Breakup is the word for spring in Alaska, because quite literally, it refers to everything thawing, including the frozen rivers. There is so much snow, so the melting could be intense and cause catastrophic flooding. We are sure to discover new rivers and ponds in areas where we don’t want rivers and ponds. The temps have been holding steady in the 30s during the days, so that’s a nice slow thawing. Let’s hope that trend continues and we don’t get any new snow dumps. I believe winter has handed her reign over to spring, although it is only April in Alaska!

Currently amazed by: The high snow banks have made it terribly difficult for the wildlife, especially the moose! They provide inspiration for fortitude and survival. 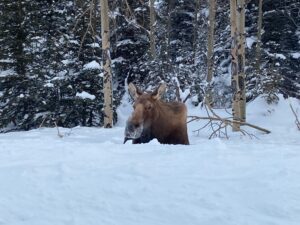 Currently excited for: Our local restaurants are digging out tunnels to the entrances, and we are just counting down the days until they open. It’s been a long winter of homemade meals and I’m getting a bit sick of our rotating menu!

Currently not excited for: I love that we are facing a very busy tourist season here in Denali, but it also means CROWDS. I really don’t know the exact population of Healy, but it goes from maybe 800 in the winter to 3000 in the summer (with seasonal folks). With that being said, if anyone is jobless in the lower 48 and wants to come up to work for the summer, there are PLENTY of positions still open.

Current guilty pleasure: Another winter survival mechanism was to keep household plants, and I’m happy to say, only 2 of them died. I also started our Aerogarden when we returned in January, and it is doing marvelously. The tomatoes are still TBD, especially since I had to transplant them earlier than expected, but I’m hopeful! 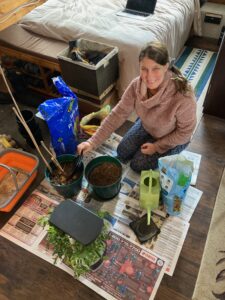 Currently watching on Netflix/Hulu/HBO Max/Starz: We haven’t watched much this month, on the account of being off the grid and sickly. But we started the last season of Outlander and are watching Survivor live on actual TV.

Currently reading: I love that I’m reading more than 1 book per month these winter days!

There are a lot of Iditarod books out there, and I’ve read a handful. I really wanted to have one to read while we were volunteering at the Iditarod, so at last minute, I perused my library’s availability and ended up with Katherine Keith’s Epic Solitude: A Story of Survival and a Quest for Meaning in the Far North. This was so much more than Katherine’s Iditarod experience. In fact, it was hardly about the Iditarod, and more about Katherine’s journey to dog mushing. This gal has experienced an extreme amount of hardship and heartache through different time periods her life. It’s actually heart-breaking. I would highly recommend the read, but just don’t expect it to be about the Iditarod.

A friend gave me Bold Spirit: Helga Estby’s Forgotten Walk Across Victorian America by Linda Lawrence Hunt and I really loved it. This is the real-life stunning account of a mother and daughter’s walk from Spokane to New York in 1896. Here’s the thing though, Helga’s walk was a silenced story that nearly went untold for reasons that don’t make sense in this day and age (women had no voice back then, remember?). The author initially heard about it from a storytelling contest entered by an 8th grader, who happened to be the great-great grandson of Helga Estby. She had to reconstruct the pieces of the puzzle without well-documented primary resources because Helga’s original letters, diary and even manuscript about the journey were all disposed of because her children condemned their mother’s actions. There were eyewitness accounts and short newspaper articles, but so much of the story remains a mystery and is left to speculation. Nonetheless, I enjoyed learning about her story and it made me think about how many life stories of humble, ordinary people (especially women) are lost in history.

Lastly, I read Adrienne Lindholm’s It Happened Like This: A Life in Alaska. I’m a sucker for every Alaska memoir out there. Adrienne’s thoughts resonated with my own about complex issues, like Alaska’s “resources, respectfully giving both sides of the argument. Her writing is captivating. With that being said, I did have the feeling the whole time I was just reading about her Alaskan adventures in a semi-chronological way without any purpose. Still good, especially if you love reading about Alaska as much as I do.