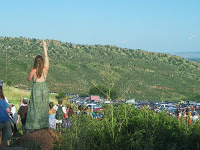 So those are the words I hear all the time when I (J) attend Phish or Grateful Dead concerts. In case you didn’t know by now, I’m a big fan of music.
Well, Phish has been on what they call a hiatus for a couple of years and last summer they decided to get back together. I went to a couple of shows, but tickets were very hard to get. Phish has system called the lottery, where they sell their own tickets before they get released to Ticketbastard. I entered along with many of my friends and family and got NOTHING!! They are going on a fall tour, so I thought the lottery would be the same. I put in for all 10 shows (NY, PA, ME, MI, OH etc) with the intention of trading them for a show I wanted to go to.SILmeow entered for me and got nothing. My wife (the Former PK) entered and holy cow, she got two tickets for Portland, Maine!! I was so stoked (she was not) and was ready to go (she was not). But, alas …. I also got one floor seat for Portland. And, get ready for this …. 2 front row seats for Syracuse, NY. I knew I’d be going to the Syracuse show, but I was unsure about the 3 tix to Portland Maine …. I only need one. I am not a scalper and never believed in that. I wanted to take a unique approach and not sell these tickets. I paid $120 for the pair. So I put an ad up on craiglist saying that I had two extra tickets for Portland and did not want money but wanted a trade. I encouraged people to come up with something unusual. Most people were selling these highly desirable tickets for hundreds over cost … (I call them #^%hole scalpers!!)So for several days I got many responses and thought I would share them with you.- 2 tickets to the Albany Phish show- Desktop PC- Blackberry Storm- Electric Scooter- 25lbs of Organic Pork, being butchered this weekend (when I told PK about this, she responded, what, do we live in a commune??)
– A music artist would write and record an original song for me of my choice (like “My feet need a rubbin”)
– A feature page on a dog Web site with the dog of my choice – Real Russian Soviet World War II cold war helmet (tempting)
– Freelance photographer services- Web site deign services- Rake my leaves- House painting service- Good Karma (tempting)
– Snowboard- Guitar- Framed concert posters- Fly fishing flies, hand tied- Records from a someone’s collectionAnd the winner was…..A couple from Northern Maine who will let PK and I stay in their log cabin on 85 acres of land and have us over for dinner in their other home this summer. Obviously they hit my sweet spot with this offer. They are also going to fill an external hard drive with mass amounts of live Grateful Dead shows and other music. My other sweet spot. And the best part is that they have not seen Phish since 1994!!!!!
So, when you say “whose got my extra?” I sure hope I do because making someone’s day is the greatest reward.Ps….. maybe someone will get my extra front row seat for Syracuse……Peace 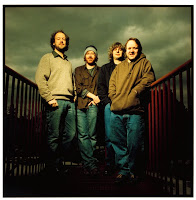