I celebrated my 38th birthday this weekend. Typically I am not a “birthday” celebration kind of gal. To me, it’s just another day. But J and his sisters love celebrating birthdays and making a big deal, so since we have so much family in Denver, it was par for the course. 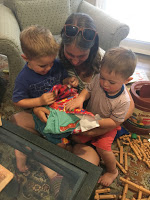 J asked me what I wanted to do for my birthday and I really wanted to climb a mountain. More specifically, Colorado’s highest peak, Mount Elbert at 14,433 feet.

We spend a lot of time in Colorado, but have yet to attempt Elbert. In an effort to climb all the state high points, we’d have to try it sooner than later, but it scared me a bit. I’ve referenced my serious lack of lung capacity as we climb higher and higher in elevation, presumably thanks to my pulmonary embolism in 2013. At 14,433 feet, Mount Elbert actually ranks as the 3rd tallest high point in the United States (behind Denali, which I will never attempt, and Mt. Whitney, which I’ve conquered).

The trail up to Mount Elbert is well-trodden and popular. In fact, we probably saw at least 300 people on our Saturday hike up it!! But grade aside, it is the elevation change that makes it a battle. It’s a little more than 5 miles to the top, but with 4,500 feet of elevation gain!

Additionally, Colorado is known for its afternoon storms, so when climbing its mountains, you need to pay very close attention to the weather. For Elbert, you are above treeline starting right around 11,900 feet, meaning you remain highly exposed for a few hours. 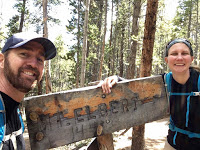 I had this whole plan for Elbert. We would camp at the trailhead at 10,100 feet, helping a little bit with acclimatization. We would also start uber early (like 5am) to give us enough time to get up and down before the afternoon storms.

Did any of that happen? Of course not. Instead, we drove 3 hrs from Denver to the trailhead, arriving around 5:45am. At this point, we both really just thought we wouldn’t make it to the top, given our late start and my snail hiking pace. Plus, this time around, I had a new symptom of altitude … I was extremely nauseous. So much that I needed to stop and take a break and drink some Powerade every 300 feet or so.  J just kept saying we could turn around anytime I wanted.

But, with every painful step, I gained determination and perseverance. We played leapfrog with so many other couples and it was typically the females who were walking like zombies. My lady friends and I would exchange a lot of encouraging glances (not speaking a word thanks to the lack of oxygen). 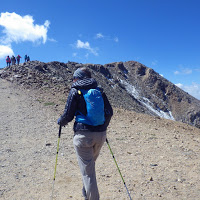 The weather was phenomenal–hardly a cloud in the sky–which gave me all the time I needed to get to the top. And about 5.5 hours after I started, I was on the summit. 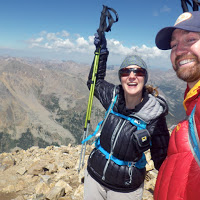 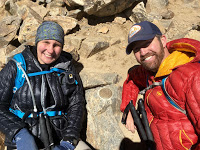 I don’t know why, but this accomplishment really made me proud. I guess I just wanted my 38-year-old lungs to know that I could still do it! 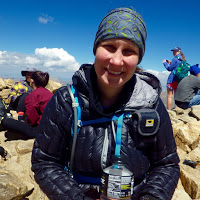